Sandshrew's body is configured to absorb water without waste, 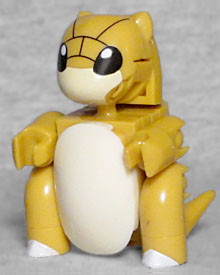 enabling it to survive in an arid desert. This Pokémon curls up to protect itself from its enemies.

Not that "Sandshrew" isn't a perfectly fine name, but come on: "Brickadillo" is right there! It looks like bricks, it looks like an armadillo, "peccadillo" is a real word... Brickadillo! I mean, yes, I'm well aware it's based on a pangolin, not an armadillo, but sometimes sacrifices must be made in the name of a good pun! And it's not like it's based on a shrew, either. You can keep the Sandslash name for the evolution. Or ditch it entirely. First form: Brickadillo. Evolved form: Sandshrew. Now that I have said it, it must be canon.

Brickadillo is built from 20 pieces, and although they're bipedal like many

of the other Pokemon, they're built much differently, with their legs coming out the sides of the body rather than the bottom. It gives them a sturdy, wide-legged stance that makes them look solidly connected to the ground. The tail can swivel, and the head is on a balljoint, though the construction of the blocks (or "blox," as the case may be) makes the face fall off really easily. Additionally, while the lines for their brick body are painted on the back and on the face, that stops abruptly when we get to the head. Mattel does know the bricks cover the entire rear of the creature, right? 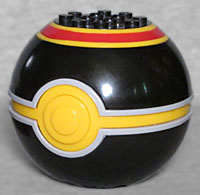 The single-packed Pokemon Mega Construx are cleverly sold inside pokéballs. To help set each series apart on the shelf, the specific style of ball changes. Series 8, of which Brickadillo is a part, comes in two styles: half the sets are in the blue and yellow Quick Ball, while the other half (including Sandshrew) come in the black, red, and yellow Luxury Ball, a super comfy ball that makes any wild Pokemon you catch grow friendlier faster. Studs on the top and the interior of the toy allow you to display your Pokemon, and Brickadillo can be stored inside without disassembling.