If you find it weird to think of buying speakers at a mall, just sit down here and listen to ol' grandpa tell you about the days when a mall would have a piano store! The Transformers BotBots mall has two music stores, but the fact that Grampiano is alone on the third floor while the rest of the Music Mob is rocking out on Level 2 calls to mind those ancient times.

Despite the name, Grampiano is not a grand piano; not even 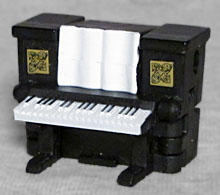 a baby grand piano. If you've only ever heard the term and never thought about what it refers to, a grand piano is the big "stereotypical" kind of piano, shaped like a harp laid flat, with a lid and sometimes a stick to prop it open. This, however, is an upright piano, the big vertical rectangle with a keyboard sticking out the front. Grand piano: concert hall. Upright piano: dance hall. This is a cute little representation of the instrument, with sculpted slats in the back, toe blocks (the "feet") at the bottom, and a keyboard with 35 sculpted keys. There's even an open music book leaning agsinst the front board.

Converting BotBots is always easy: fold the toe blocks to the outside, lower the keys, raise the arms and head, and fold down the legs. Robot!

Grampiano is a musical maestro who has seen it all. This elegant bot knows the right note to play at any moment. Whether playing 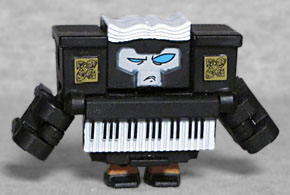 a timeless melody or a tune she's trying out for the first time, she's perfection personified.

The face is definitely imperious, looking like someone who would be mad if you interrupted her. The robot is very blocky, with the arms just sticking out awkwardly to the sides, but the piano keys folding down against the stomach makes sure we always remember what the altmode is, and using the sheet music to become Beethoven hair is a brilliant design! And hidden deep inside the notch where the robot legs go, you'll find a few sculpted music notes. Clever little touch.

Grampiano is only available in one set: the Music Mob 5-pack, which also includes Be-Oh, Nacho Problem, Pink Key Pop, and the hidden Overpack. The mold will also be reused in Series 3 for a character named Calamity Keys. 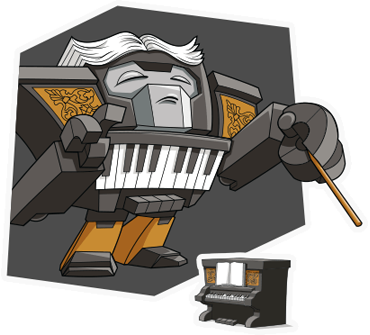