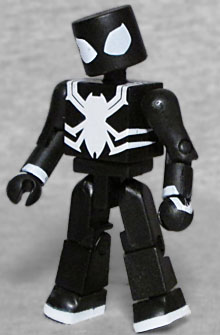 Recovered on a space mission, the substance known as V-252 is actually a symbiotic creature, which bonds to Peter Parker and increases his aggression.

Disney's Ultimate Spider-Man cartoon has been cancelled, replaced by the plain-titled Spider-Man. This series' version of the Venom symbiote (named for the comic issue where it first appeared) has a unique black-and-white pattern, with angled rings around the wrists, white soles on the feet, and a symbol that's more angular on the chest, but ends before it wraps all the way around to the back, leaving room for a large white version of Spidey's usual back-emblem. The set also includes a web-line for him. 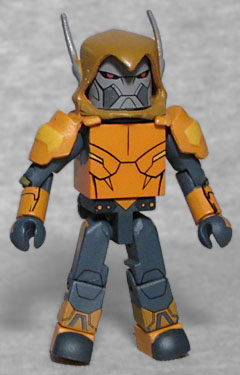 Hiding his true face behind a hood and metallic mask, the mysterious Hobgoblin will stop at nothing to destroy Spider-Man.

That is... not entirely accurate? But also it is? This cartoon's Hobgoblin is Harry Osborn, of course, but he's a hero; however, his father Norman also wore the armor in an effort to gaslight his son/kill Spidey, so who's to say which one of them this is? The mask is just painted on, so it's not like you can remove it to reveal who's inside. Hobby Gobby retains the orange-and-bluish-grey colorscheme, but the suit is more like armor than a costume. The ears, hood, shoulder pads, and backpack things are all one large removable piece. While the set includes a waist "flip" stand either figure could use (mine broke right out of the package, alas), we don't get Hobgoblin's glider or his flaming sword.