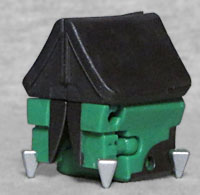 While all the other Con Crew bots are all pretty straightforward, this one requires some thought: why would a convention-goer need a tent? Well, the normal ones wouldn't, but the people who sleep outside at SDCC for the hope of getting into their preferred Hall H panel certainly could. This is a fancy camping tent, not a little pop-up shelter. It's got four distinct sides, a sculpted vent or screen window on the top, flaps for a door, and spikes at each corner to anchor the tent to the ground - a feature that would work a lot better out in nature than on a cement sidewalk.

BotBots are easy to convert, because they're tiny and made of fun: split the top of the tent out to the sides, swing out the arms, and fold down the legs. Finito!

An in-depth conversation with Vigitente. When the night is cold and the line is long, there's only one bot you can count on. Join her as she details 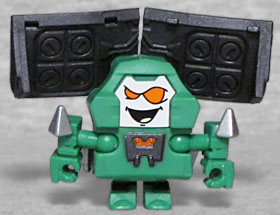 her daring adventures as a night watch vigilante.

In the package, Vigitente's flaps are folded down flat against her head, but the instructions would have you spread them behind her - the sculpted details on the inside suggest they're missile launchers? Heavy ordnance for a flimsy robot! The shape of the head is kinda of reminiscent of G1 Megatron's helmet - something that may be furthered by the green "Generation 2"-ish colorscheme and the bit of sculpted detail on the chest. She's got a silly look on her face, and the shoulders are balljoints. 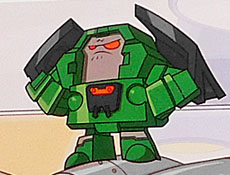 Vigitente was a new mold when this set was released, but it was also used soon after in Series 3 to create Mal Content.