The Fantastic Four are back in comics, and so they're back in toy aisles, as well.

Sue Storm has the ability to bend light, making herself and others invisible.

She's got the ability to do more than that, too, which you know if you've read the recent Invisible Woman: Partners in Crime series by Mark Waid. It's really good, and has Sue using her powers in new and inventive ways.

This figure is mostly the same as the Walgreens exclusive from a couple years ago: she gets longer shins, to make her taller, and is wearing wedge heels instead of flats, but this is the same woman. Even the face is the same mold, though a different style of hair has been glued on top of it. The feet aren't reused from any other figures, because the current FF costumes has cleats on the shoes, and those have been molded here. The new costumes are black with blue elements, things that are more like patterns on the surface than actual gloves or belts. There's still a 4 logo right in the center of the chest, though. 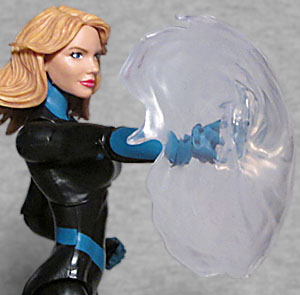 While the last Invisible Woman came with HERBIE the robot, this one gets a neat new clear shield depicting her powers. It's shaped to fit onto the splayed fingers of her right hand, and is sculpted with a swirled pattern that makes it look like something created naturally rather than digitally. It's a really neat piece, and the reused sculpt of the figure means you'll be able to lend it to anyone who uses that right hand.

This series has a Build-A-Figure - the Super Skrull - and Sue has the entire torso.

The new costumes aren't as appealing for action figures as something more classic would be, but there was already a full set of the most famous suits, so why not do the trendy ones now and save the "blue and white" costumes for later down the line? Gives the property some legs.