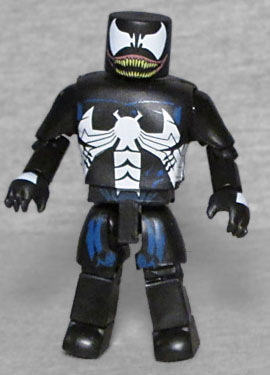 One of Spider-Man's greatest foes, Venom must help his enemy stop Carnage, whose powers stem from Venom's symbiotic costume.

This is a strange Venom figure. We've had lots of him before, in different designs and sizes, but this one brings a combo of parts no other one has. We start with the standard Minimate body, of course, and he gets small clawed hands. Perfectly normal so far. There's also a chest cap to make him look bulkier, but that's nothing new. What's weird is that he gets the add-on thigh pieces without also getting bigger shins/feet. Don't see that often! The chest and thighs get blue highlights to create anatomy, and his small sharp teeth are yellow.

A twisted copy of Spider-Man created during the Infinity War, 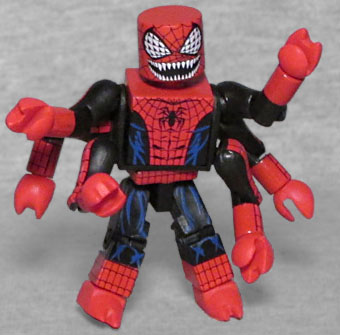 the Doppelganger is adopted by Carnage and Shriek during their deadly rampage.

"Maximum Carnage" was definitely Doppelganger's big time to shine, so it absolutely makes sense he'd be included here in Series 76. Just like with Marvel Legends, Minimate Doppelganger shares a lot of pieces with Six-Armed Spider-Man, but he still gets new hands and feet - they're not even shared with Nightcrawler, because the claws are sharp, not rounded. The compound eyes

look nice, but there's a weird overlap in the webbing pattern on the back - looks like whoever designed the paint mask misjudged the size of the head, and nobody caught the mistake until it was too late. Plus on mine, the "eyes and mouth" app and the "webs" app are misaligned, so the spot where all the lines come together is off-center. Wowsers!

Series 76 is one of the ones that has a Build-A-Figure, so the set includes some pieces for that. The figure is Shriek, and the piece is her torso.