The Mastodon Zord, piloted by the Black Ranger, 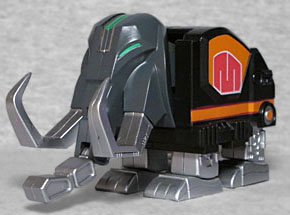 could fire frigid blasts of cold air temporarily freezing enemies. The Mastodon Zord lies dormant in the deep Arctic unless summoned by the Black Ranger to battle foes.

Why do the Zords live off in the middle of nowhere? It made sense for Voltron's lions to be stationed all over the planet, so they could provide more coverage, but Power Rangers monsters only ever attack Angel Grove, a city the size of Tampa, Florida; the Rangers could park all the Zords in the mall parking lot and still protect everything they need to.

It's harder to "superdeform" a quadruped than something 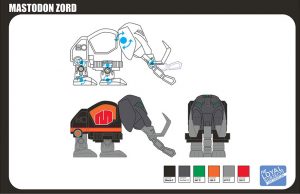 that stands on two legs, so the Mastodon Zord looks more normal than the T-Rex did. The toy was designed by Frank Pepito, who did a nice job capturing all the details from the show prop and translating them to this little piece of plastic. The paint could be better - part of the trunk is grey instead of silver, and there are no details on the ears - but the articulation is decent, with movement at the feet, the tops of the legs, the head, and the mid-trunk.

of figures on the back, plus a totally unexpected surprise: a tiny Black Ranger figure! It stands only about an inch tall, and its only articulation is a single hinge through the hips, but it's painted pretty well for its size and, oh yeah, the helmet is removable! You can take it off to see a wee little likeness of... wait a minute, that's not Zack. I may not know much about Power Rangers, but I know the Black Ranger was a black guy; it was noticeably weird even by '90s standards. The box suggests these toys are based on Power Rangers: The Movie, which would mean this is meant to be Adam, but Adam and the other replacement Rangers never piloted the Dinozords, so he has no business being here.