Remember when doing an addendum after a year seemed like a long time? This one goes with a review from 2013.

that then existed - Laserbeak, Ravage, Frenzy and Rumble, and Buzzsaw - but a sixth was already in development. The Japanese release of Soundblaster (Soundwave's black repaint) came with the only other prominent cassette, Ratbat. Ratbat's sole US release came via the Transformers and GI Joe Collectors' Club(s), in a crossover set that sold out before I could get it. But hey, Singles' Day exists, so here we are!

Ratbat's altmode is of course a micro-cassette - in other words, a thin rectangle with two holes through it. It's a dark magenta with silver detailing on the front, and can be stored in the included cassette case. Not a ton to say about it, because it's not meant to be used on its own; its role is to be an accessory for Soundwave's tape player mode.

Has no friends, only business partners... his only allegiance is to himself. Refuels by plunging his mecha-fangs into new cars' gas lines - the better made the car, the better the gasoline tastes. Maximum flying speed: 65mph. Carries two radar-guided, free-electron lasers that detect the presence of an object 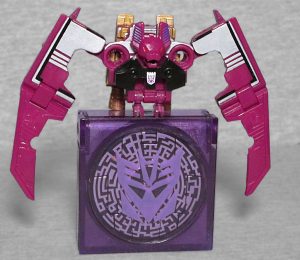 as small as a fly. Wings contain mechanical sensors for locating fuel sources. Has one foot wingspan that can enlarge to ten feet. Wings are vulnerable to artillery.

On the original 1986 toy, Ratbat was designed to look like a fruit bat, with a long snout and small ears; the cartoon drew him more like a vampire bat, with a short snout and larger ears. Since the animation is more familiar to fans, that's what the MP figure aims for. The transformation scheme means that the cassette tape's deco ends up on the front of the wings, rather than the back, but the modern engineering also means that (like Laserbeak and Ravage) the gold weapons that were once separate accessories are now integrated directly into the toy. (My Ratbat is missing one of the gold paint apps, but hey, you get what you pay for.)

I still like my Generations "Senator" Ratbat, but gettting the nifty Masterpiece mold to complete Soundwave's crew is long overdue.