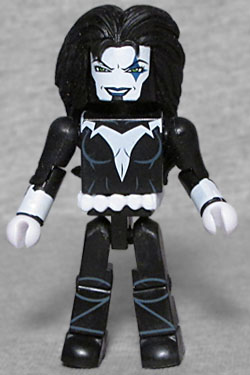 Emancipated from the maximum security mental institution known as Ravencroft by the insane Carnage, this femme fatale - appropriately named Shriek - eagerly joined the frenzy of Maximum Carnage as the "surrogate mother" to a family of Spider-Man's enemies! Living up to her shrill namesake, she turned Manhattan into a riot scene of epic proportions with her "psychic virus" and sonic blasts!

As the Build-A-Figure for Marvel Minimates Series 76, Shriek doesn't get a bio anywhere on the packaging, so that text comes from a trading card. You may question the logic of recruiting a mutant villain with sonic-based powers for a team led by someone wearing a symbiote that's weak to sound, but hey, nobody ever accused Carnage of being sane.

Shriek's skin is white, meaning that's a cut-out over her chest, not just a design on the costume - and since it goes all the way around, she's basically wearing

a strapless jumpsuit and a separate neckwarmer. (The white should go onto the shoulders, but that would be too hard to do in this style, so they cheated it by cleverly just doing it on the sides of the torso.) Since the arms are molded in black, we're left with visible rings at her wrists. Her belt is a molded piece, and they've even remembered to paint the loose cords around her shins.