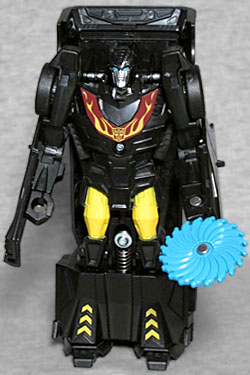 "Think of the most dangerous mission a bot could possibly volunteer for. Hot Rod will be there, racing into battle without thinking twice about it. Some of the older Autobots might call him a showoff, but he's my favorite person to pull off reckless stunts with. Hot Rod is always down for a friendly race to prove he rules the roads. Just be prepared for him to demand infinite do-overs until he finally wins." --Bumblebee

So Cyberverse Hot Rod's immaturity manifests like he's someone's little brother? How... charming. Nice as Slipstream was, she didn't exactly inspire me to run out and buy a bunch more Cyberverse figures, so the only reason Roddy is being reviewed today is because he was part of a multipack. The dull part. The figure only moves at the neck and elbows, and has a "Fusion Flame" buzzsaw that swings off of his left hand.

This particular toy is a One-Step Changer, like Stinger: 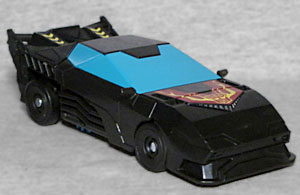 turn the shins 180° and automatically the arms fold in and the head drops down to put the hood in place, leaving us with a car. Woo. Such fun. No doubt it's great for the kids it's actually aimed at, so we won't be too harsh on it. The car mode is very blocky, and, since this Hot Rod is a "Stealth Force" repaint, almost entirely black. But not Black Rodimus, because his flames are still red and yellow, not blue and purple. So that's the filler half of the set; let's get to the reason anybody is buying it. 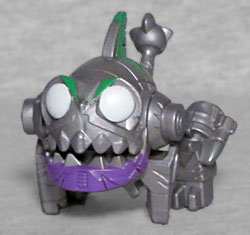 This Target exclusive is technically called "Sharkticons Attack," so you'd expect Hot Rod to be facing off with a Sharkticon, wouldn't you? Well, he's not - he's facing three of them! Cyberverse uses the "evergreen" designs, which means it's basically G1, so its Sharkticons look like G1 Sharkticons, which means they don't look like sharks at all: a round body with large white forward-facing eyes and no snout, and four limbs (two large legs, and two skinny arms). At least it's got a fin on the back, right?

Two of the Sharkticons have green stripes on their back, 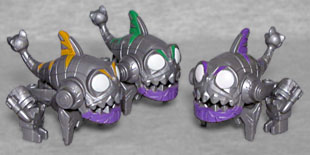 while the third has yellowy orange. It seems like this is maybe a commander and two underlings, but in the one episode where they've appeared, the Sharkticons are divided into three little gangs - the Fins, the Snouts, and the Tails - who each have their own colorscheme. Since the Tails and the Snouts are orange and green, respectively, you have to wonder if the original plan was to paint one of the figures in "Fins" purple. May be time for a custom! 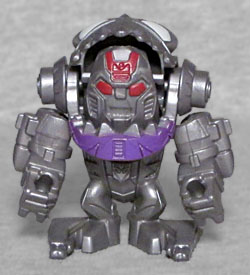 Converting the Sharkons is super super simple, yet still quite clever. You might expect this would be a case of "stand up to robot," since the face is inside the mouth and the altmode has four limbs, but that's not the case: you change them by lifting the back slightly, and rotating it 180°; the shark's arms become the robot's legs, and vice versa. Nifty! It makes for a powerful-looking little brute, and there are missiles sculpted on the balljointed arms. They never transformed in their episode (and even if they had, they probably wouldn't have had Decepticon symbols on their chests), but this is still a fine little design.

The small size and simple conversion reminds me of my beloved BotBots, which is why I wanted this set. Well, honestly I would have been fine with just a single Sharkticon, but that's not an option. This set retails for $20, which is too much, but Target had a "buy one, get one 50% off sale" recently that allowed me to get it for less. Ten bucks? Sure, okay. Hot Rod's up for grabs, if anyone out there wants him, but the Sharkticons are cute and fun.