The Lost Bots can be found all over the mall, with no rhyme or reason as to where they are. Why, it's almost like they've gotten... misplaced, or something? If you look at the art, you'll find Smooth Shaker riding the elevator - which, amusingly, was the same place another Lost Bot was located. Maybe they're lost together. 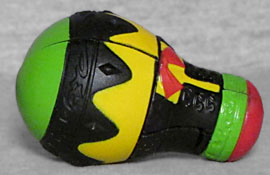 Like Series 2's Dizzy Bones, Smooth Shaker is a maraca. That's good, because as an instrument, they're usually played in pairs, with one having a higher pitch than the other. How would you even write musical notation for maracas? "Shake. Now shake harder. Keep shaking. Shake some more. Shake differently." This version is mostly black, with yellow and green detailing and a few spots of red. The maraca can either lay down (like a real one would) or stand on end (if you're careful). 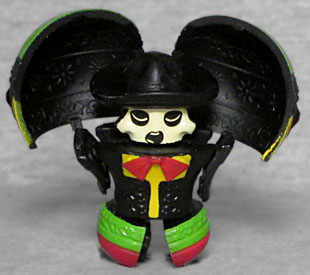 Smooth Shaker is all about chilling out and letting the maracas roll. She doesn't bother anyone, and doesn't let anything bother her. Smooth Shaker just wants to shake it to the beat and get other bots dancing along. Peace, love, and groovy times!

Since Smooth Shaker's body is black, it's harder to see the sculpted details than on Dizzy Bones (and the hat doesn't stand out as strongly), but the overall look is much more traditional mariachi. The red necktie pops against the yellow stripe on the chest. The white face really accentuates how much the head looks like a skull. 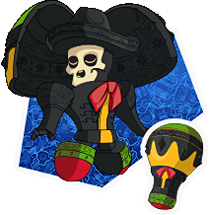