Snow White may have been the first princess, but Cinderella is the princess - it's not like "Snow White's Castle" is the identifiable landmark that looms over the parks and serves as the company's logo, now is it? Cinderella was released in 1950, 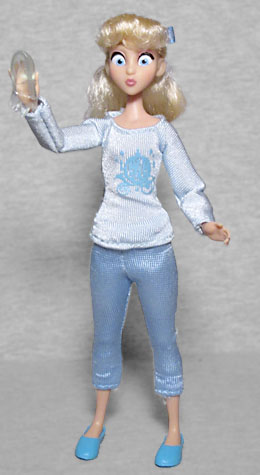 the first big movie Disney made after World War II. The studio was floundering at the time, so it desperately needed a major hit. Walt wasn't sure whether they should do that or Alice in Wonderland, so he split the artists into two teams and had them compete against each other. Cinderella was finished first, so Alice had to wait until the next year for its release.

Fittingly, Cinderella was one of the two princesses who first took interest in Vanellope's unusual clothes; in fact, it was her mouse friends who made all the new outfits for the crew. Cindy's comfy clothes comprise a silver sweatshirt with a pumpkin carriage logo and the slogan G2G - "gotta go," referencing her escape from the ball - a pair of pale blue stretch pants, and brown shoes. At least, that's how it is in the movie: this doll makes both her shoes and her shirt blue, something that has a history of happening to her (in the 1950 movie, her dress is silver, but it's rarely depicted as anything other than blue in other media). This figure is one of the ones in the set to get an accessory, as well: tied to her hand is the glass slipper she shattered and threatened to stab Vanellope with. It's best to leave the rubber band on, since her hand isn't shaped to actually hold the thing. 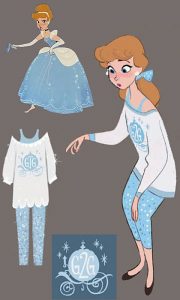 All the Comfy Princesses have the same joints: balljointed head, swivel/hinge shoulders and elbows, swivel/hinge hips, and knees that are ratchet joints inside a rubber sleeve, making the legs seamless. Rubber ankles mean they're very hard to stand, though. The hair is rooted, and shaped to match the style seen in the film: a ponytail held by a blue bow, and for once, her ears are visible - no one really noticed it until the Wreck-It Ralph renders were released, but classic Cin never had visible ears with her ballgown. of course, she also had auburn hair, not blonde, so really the popular image of Cinderella has as much to do with the actual movie as the movie had to do with the real fairy tale.