Hasbro brought a Transformers BotBots exclusive with them to San Diego Comic-Con last year: the "Con Crew" set, which features 'bots from three different factions: the Fantastic Fuelers, the Meet n' Greets, and the Line League. 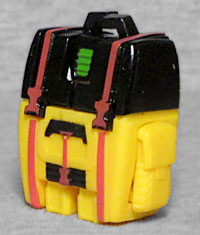 Forget coffee and videogames, the thing you really need at a convention is a good backpack. Not only are you going to be buying things all day, but people are also going to be handing you things that you'll want to tuck in a pocket to examine later back at your hotel room. This is a big, sturdy-lookin' bag, yellow with a black flap over the top and heavy duty red straps keeping it closed - no pickpockets will be getting your swag, no way! There are shoulder straps molded on the back of it, but don't expect to put this on any figures. However, think how fun it would have been if they'd put a peg on there that was GI Joe-compatible.

BotBots are half-step measure between "baby's first Transformer" things like Robot Heroes and the "real" TFs us nerds love, so they're fairly easy to convert. In this case, pulling out the arms and legs is simple, with the most difficult part being swinging the flaps away from the face.

Everything you wanted to know about being overly helpful, 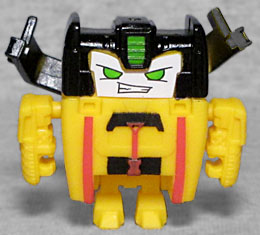 all in one panel. Join Con-Packtor as he unpacks the secrets of how to carry way too much stuff, and how to hold everyone else's place in line.

Con-Packtor has a very wide, boxy robot mode that makes him look strong - in other words, capable of carrying all the junk you hand him. His head is a very classic "Transformer" shape, with a black helmet part that has fins on the sides and a ridged crest in the center. His teeth are gritted and his eyes slant inward - normally that might make him look angry, but in this case, it just seems like he's straining to move something heavy. Totes appropes! 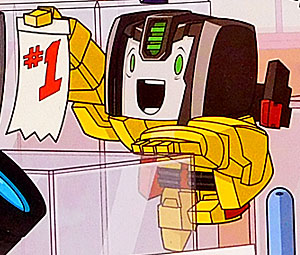 The SDCC set came out slightly before Series 3 did, so Con-Packtor got to be a unique mold for at least a little while: the blind-packed Rink Stink gets the same sculpt, in different colors.