The Transformers BotBots are divided into various teams (31 and counting!), based on what store in the mall they hail from. For instance, in the first section of the mall, there were two home and garden stores, both bringing us the members of the Shed Heads; the one upstairs on Level 2 was more about tools, while the one downstairs behind the escalator seemed to be selling more plants. 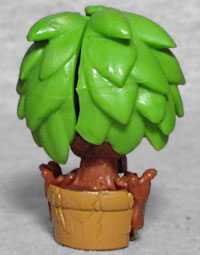 Everyone enjoys a nice potted plant - in fact, part of the reason no human civilization has ever lived permanently underground is that we literally need to see green plants for our mental health to stay stable (that and the lack of natural light are two of the factors behind Seasonal Affective Disorder). Even a little succulent on your desk is enough to offset that, which is pretty impressive. This is meant to be a larger bush, judging by the visible trunk. It's outgrowing its current home, judging by the cracks in its pot and the roots growing up over the side. The panels on the side should have been painted to match the rest of the clay pot, not left the same dark brown as the dirt.

To convert Rootwing, spread the leaves, fold down the tail, and swing the feet around into place. Easy! 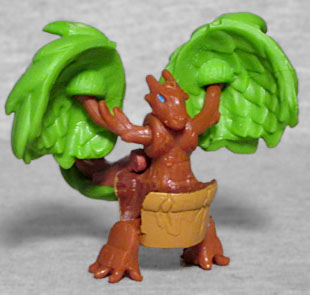 making him one of the wisest bots around. It's just hard for him to tell the other bots because he always shoots fire out of his mouth when he tries to talk.

Again with the dragons! Not even Trans5mers: Planet of the Earth had as many dragons as this line, and its whole thing was knights and dragons! He's surprisingly stable on those feet thanks to the way the toes spread out, and the leafy wings are on balljoints so you can pose them better. The little reptile face looks like it's carved from wood, which suits the design perfectly. The tail is held aloft, rather than being used for balance like others'. 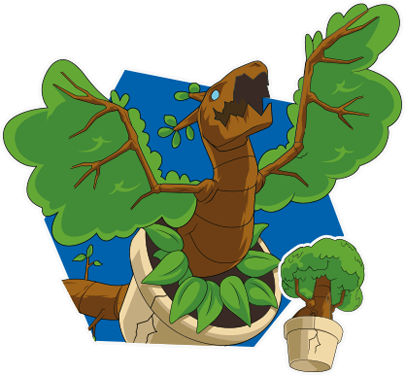 Rootwing is only available blindpacked in Series 1, as #13. The mold was reused for Series 3's Smerg the Sad, who was supposed to be a spinach plant?