When Michonne first joined the survivors at the prison, 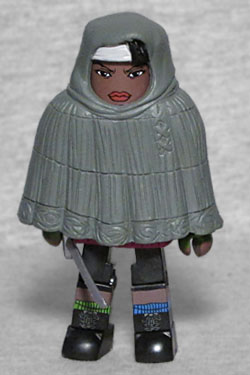 she thought the hard days were behind her. But her experiences in Woodbury at the hands of the Governor were among the worst she had ever endured.

No kidding. Like we've said before, comic Governor is a lot worse than TV Governor, and deserved every awful thing that happened to him. And more. But this Minimate is from Michonne's first appearance in Walking Dead #19, before he'd even shown up. She's called "Hooded Michonne" because she's wearing the poncho she had when she was still leading Mike and Terry around the wilderness. The original plan was that you'd remove her arms to get the poncho on, then plug the hands into the lower edge so it still looked correct; the final product just makes it a piece that goes over top the full body beneath, so it ends up wider, and thus looks thicker. Like a cloak instead of a poncho. She includes her sword, and alternate hair if you can get the poncho off.

One of the Governor's lieutenants, Gabe stepped up to be 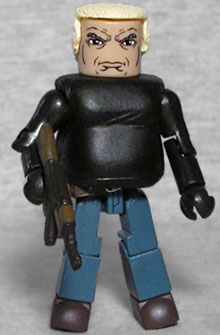 his right-hand man after Bruce was killed, helping the Governor plan and execute the attack on the prison.

Gabriel Harris was dedicated to the Governor, but that didn't run both ways: the Gov simply referred to him as "my fat friend," and would beat or berate Gabe when he dared question any decisions. So basically, he was the Ted Cruz or Chris Christie of Woodbury. He's definitely not a visually interesting Minimate, being simply a guy in a black sweatshirt and blue jeans. He uses the portly chest cap, and his belly hangs out over his gun belt. He must be wearing gloves, because the hands are black with a patch of pink on the backs. His unhappy/angry face is tampoed well. You can arm him with the set's included AK-47 and handgun.

When Michonne first joined the survivors at the prison 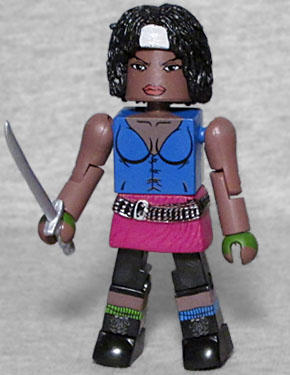 she thought the hard days were behind her. But when the Woodbury survivors declared war on the prison, she quickly learned that the living are worse than the dead.

She did, though that wouldn't be for, like, 25 more issues after the issue this Minimate represents. Though she's called "Hooded Michonne," you can take the poncho off her to reveal the clothes she has on beneath: a low-cut blue top, a pink skirt with a studded belt, fingerless green gloves, black leggings, and mis-matched socks inside her high boots. Since the hood needs to fit over her head, she's bald when you take it off - that's why the set includes a new piece of hair to replace it, showing her dreadlocks being held back by a white headband. And you know she's going to have her katana! 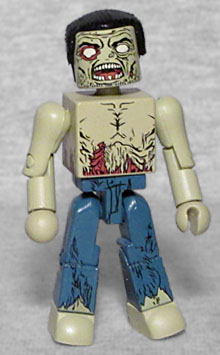 Survival tip: Always check the ground and look under cars when in a non-secure area. Not every zombie stalks his prey standing up - legless zombies are just as hungry, and often fly below the radar.

This is really interesting. All the Walking Dead Minimates zombies are based on ones that actually appeared in the comics, though this one is really skirting the issue of that. With The Governor returning in issue #43, Image Comics couldn't just send out the cover with his picture front and center three months ahead of time - so they released a fake cover with a drawing of a zombie crawling along the ground. The same art was used as the "next issue" solicitation in the back of Walking Dead #42, so the Crawling Zombie appeared in the comics via a technicality.

The Crawling Zombie has legs in the package, ones with ripped-up 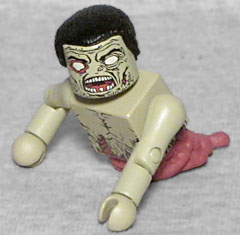 jeans covering them. That doesn't match the art or the name, so he also includes the entrails also seen in the Marvel Villain Zombies box set. To line up with those, the skin on his abdomen is gone, leaving a ragged red edge all around the waist - even on the sides! The remaining body is dried out and shriveled, with visible ribs and spine pressing against the skin. His mouth is open wide, allowing us to count his teeth and see how many are missing. And because he's been crawling along the ground, the backs of his forearms are all scraped up, while the fronts are fine. Smart!