Like Series 4, Transformers BotBots Series 5 continues the trend of not including an insert showing the interior of the mall. How are we supposed to know where the Wilderness Troop hangs out? Judging by the stars showing their individual "Levels," though, Handy Dandy would have been on the ground floor with two others.

The original Swiss army knife was imported from Germany - in the late 19th century, all members of the Swiss army was required to have a pocket knife, but they were only being made in Germany. It wasn't until 1891 that Karl Elsener won the contract 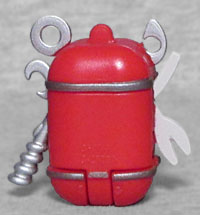 to make them locally. The guideline was that the tools had to be able to open canned food and service the Swiss service rifle (which required a screwdriver for assembly/disassembly). Modern Swiss army knives have a lot more devices inside them, with this one appearing to have a corkscrew, some scissors, a bottle opener... some other things... okay, it's hard to tell what they all are (is that supposed to be a magnifying glass? a wrench? a spork? a file?), but the red body and silver tools make it clear what this is supposed to be. There's even a little silver badge on the top that calls to mind the Victorinox logo. The shape of the "knife" is very short and squat, making it hard to identify at first glance; until I realized what all the thing sticking out of it were, I thought it was a carry-on suitcase or something.

BotBots are easy to convert. Rotate the feet down, lift the top of the head, fold down the chest, and pull the arms out to the sides.

Handy Dandy is the bot you want to have around when resources are lean and problems need to be solved. She once made a go-kart, a computer, and a pair of socks out of a discarded stick and a wad of chewed gum she found 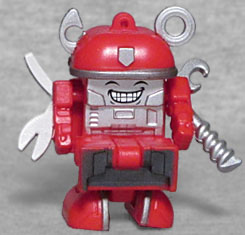 on the floor! She can always figure out a way to use whatever's handy.

Oh, she's MacGuyver! That makes sense. She's got a massively happy look on her face, between the huge toothy grin and the smiling eyes. The proportions are a little wonky, thanks to the way the front folds over, but the sculpted details on the chest definitely look like the interior of a Swiss army knife. The arms get lost among all the things hanging off them - if those had been better integrated into the design, it'd be a more impressive robot design. The tools stuck to the right arm are white instead of silver - I'd say that was just an incomplete paint app, but the official packaged photos show them the same way? So if it's a mistake, it's a wide one.

Handy Dandy is available in a Los Deliciosos 5-pack, or a Hibotchi Heats 8-pack.