When MotU Minis Series 2 got cancelled, we lost two uses of one mold: Mekaneck and Stinkor, who have since the '80s shared the same distinctive chest armor. Well, Eternia Minis Series 2 has at least rectified half that deficit, putting the 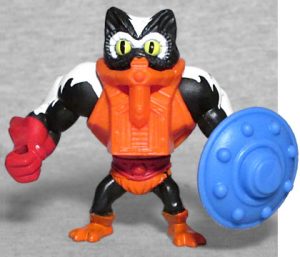 Evil Master of Odors in the case marked with an F.

Mini Stinkor is based on the vintage figure, not the superior Mo2K design, because he's just got Skeletor arms instead of claws, and there's no air tank on his back. Even though there's a hole where they could have plugged one in. His only accessory is a cornflower blue shield; the cancelled one would also have come with a gun, but a shield is all the vintage one came with anyway. Credit, though, for not just reusing Mer-Man's head: remember, they used the same head back in the '80s, but these days Mermy gets a more aquatic look.

The Minis only swivel at the neck, waist, and shoulders. The Series 2 figures are sold in purple plastic containers shaped like the old Snake Mountain toy. The back is just as detailed as the front - vines, stones, all that. It's even sculpted with representations of the wolf-gated cage and the curling snake-head next to it. And given the way the shells work, you can even display it fully open, like the old toy.