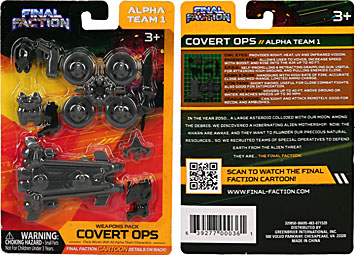 The Synthoid Accessory Pack is just one of three sets available for the Kharn aliens, but even that's not the end of it: there are three sets for the Alpha Team, as well: the Air Assault pack, which has a slew of attachments for the team robot; the Heavy Arms pack, a whole bunch of big guns; and today's focus, the Covert Ops pack. And because this line is awesome, the back of the card tells us what everything is and what it does. 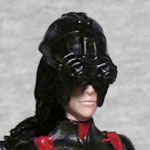 Because a normal goggle headset might be flimsy at this scale, the Owl Eyes add material between the three straps, so this is more like a full helmet. The only Final Faction human I have so far is Shift, so I wasn't sure if this would fit over her hair properly. Surprirse surprise, it does! It's not the best fit, but it's a fit. The goggles have a detailed sculpt, but it's unclear what the idea behind the little flaps that come down over the cheeks is supposed to be.

Phoenix Pack
Allows user to hover, increase speed with boost, and rise into the air up to 40 ft. 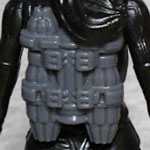 Another piece I wasn't sure would work, this is a small rocket jetpack, a la The Rockawho, but Shift's hair sticks out far enough from her back that you can get the piece plugged in. Nice! The pack is fairly flat, rather than having big, rounded rockets, but the detailing is good regardless, with air intakes at the top, thrusters at the bottom, and structural tech things in between. It's much smaller than GI Joe's JUMP jetpack, but hey, those were made in the '80s, and this is the year 2050. 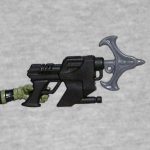 All the pieces in the accessory packs are just molded in a single color, whatever color that is - for this pack, everything is either black or grey, with no paint or variation; "everything" that is, except the SPRG, because it's done as two pieces. That's right, this $1 toy features a grappling gun with a removable grapnel! There are full-price 6" figures that can't even manage that! Both halves even have a molded loop where you could tie on your own string if you wanted to. 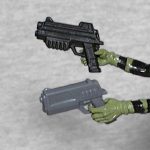 Speaking of 6" figures, all three guns in this set seem scaled more for that size than the 4" figures they're meant to go with. That's not necessarily a bad thing: want to army-build AIM or Hydra troopers, but need some more weapon variety? For a single dollar, here ya go! It stands to reason the bigger guns in the Heavy Arms pack might be the same way. These two pistols have different sculpts, when the easy way out would have been to make a matched pair. They're already molded in different colors, so that would have been the expected move, but no: as always, Final Faction goes above and beyond. 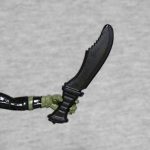 These descriptions got jokes! First the grappling gun snarks about using it to pull enemies closer, now the sword seems to be sharing Lock, Stock, and Two Smoking Barrels' opinion on "big, @*&&-off, shiny knives." Of course, that would be truer if the sword could have gotten a silver paint app on the blade, instead of being solid black, but so it goes. In the hands of a 6" figure, this would just be a big buck knife.

Stratus Board
Hovers up to 40 ft. above ground or water, reaches speeds up to 30 mph. 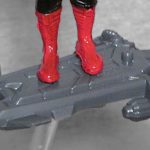 Water?! Obviously the hoverboards of 2050 are better than the ones we had in 2015. This skyboard is one of the biggest accessories in the pack, and is fully detailed both above and below. It has small wings at the front and back, things underneath that look like vents to keep it aloft, and two pegs on the top to keep a figure attached. There's one peg at the far back and another nearer the front, and since the Final Faction figures can't move their legs to the side, we're left to conclude that either this was designed for Generation 3 GI Joes, that it's meant to carry two figures, or that we're just getting the option of where the figure prefers to stand when they're riding a surfboard four stories above street level.

Dragon Drone
Can sight and attack remotely. Good for recon. And ambushes. 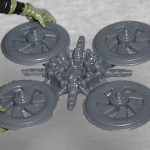 And here's the reason I actually wanted this set: a detailed, 4"-scale drone! Now, GI Joe has had a drone before, but that was a UAV style one, while this is what you think of when you think "drone": a central little body with four circular propellers at the corners and eight cameras mounted in a ring underneath. The blades don't spin, there are no (obvious) weapons attached... it's just a cool little drone accessory that would look awesome in all sorts of collections. And if you spend $1 on that, then the rest of everything in this pack is free.

The art of the accessory pack seemed to have gone the way of JNCO jeans: at one time, they were really big, but these days they're not a thing. Accessory packs were all over the place in '80s toylines, McFarlane did one in 2001, NECA's released a couple for their horror figures, DC Direct did a few, but overall, it's not a thing we see a lot of any more (not in the US, at least). Final Faction is bringing the idea back in a big way, though it's hard to imagine any other toymaker making the choice to offer eight pieces for only a buck. Though maybe if they see there's a viable market, they'll reconsider.

This entry was posted in blog exclusive review and tagged Final Faction. Bookmark the permalink.