We're drawing ever-closer to the release of Horizon Zero Dawn 2: Horizon Zero Noon, so we should probably finish reviewing the Mystery Minis from the first game. Since we began with a Watcher, the smallest of the machines, so it only makes sense we'd wrap up with the biggest. You know how every open-world game these days has to have radio towers? The thing you have to climb to fill in your map, so programmers can keep you constrained to one area until they're ready for you to go to another? Well, this is that for HZD. It's a Tallneck: oblivious to interruption, it walks around, monitoring the area and local conditions; it's a wandering radio tower that keeps all the various machines in contact with one another, and Aloy can climb it to hack its brain for info on the surrounding area. ("Surrounding," in this case, being a relative term, since there are only five of them to cover the game's entire map, meaning each one brings you a huge wealth of uncovered territory.) 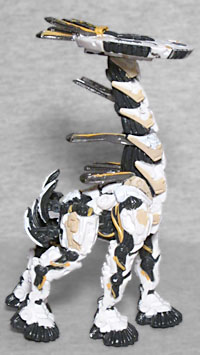 The Tallneck is, obviously, a giraffe. A giraffe with the USS Enterprise for a head. Sure, that's probably meant to be the sort of radar dish you'd see on a communications plane, but it looks like a starship. The body of the creature is white armor over a grey frame, with spikes along the back of the neck to facilitate climbing. The toy's pose isn't quite right: giraffes (and thus Tallnecks) move both legs on one side of their body at a time, and here the left legs are in separate poses - front leg forward, rear leg back. Although there's absolutely no attempt at scale in this line, the Tallneck does stand above the rest, and is so far the only Mystery Mini that had to be sold in two separate pieces to fit inside the box: the head and body are both bagged together, but you'll have to assemble them once you open it.