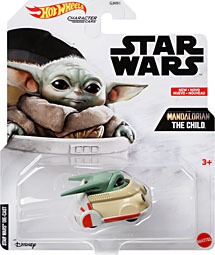 I miss the days when Hot Wheels Character Cars had text on the back of the cards. Yes, partially because it made my job easier, but also because it's just good toymaking. It can say more than "hey, remember Baby Yoda? He's back! In pog car form!" Which is more than I'm capable of, apparently. But then, I'm not a professional copy writer, just a dork with strong opinions and an actual work ethic. [Why do you write like tomorrow won't arrive? Why do you write like you need it to survive? Why do you write every second you're alive, every second you're alive? --ed.]

Yoda has been a Character Car in the past, 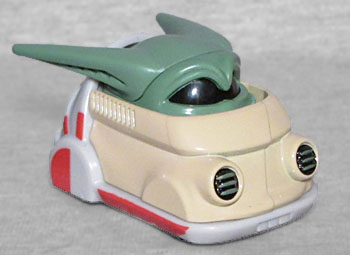 so you might expect a little bit of design overlap between that and Yodito. Honestly, there's not. Boomer Yoda lent his head to almost the entire vehicle, with just a little bit of his robe over the rear wheels; Baby Yoda is a timid character, so most of the car is his robe, with the windshield eyes just peeking out above the collar, and his tiny fingers in the headlights. The ears could almost be 1950s-style tailfins, but frankly, this is a lot more "character" than "car," meaning it could use a better balance between the two. 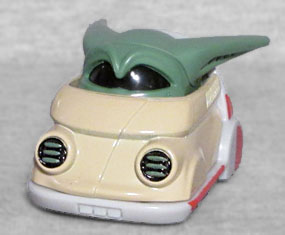 The toy was designed by Charlie Angulo, who opted to hide the wheels since we never get to see Grogu's feet when he's walking around. And also because the lower edge of the car is patterned after the Baby's hover pram. There's a play feature here, too: as you roll the car, bumps on the front wheels make the head raise up. The wheels turn independently, so it's not like he's just moving up and down - it's more like he's bopping around. And when the head is all the way up, you can see there's a frog sticking out of his mouth. Or grill, I guess.