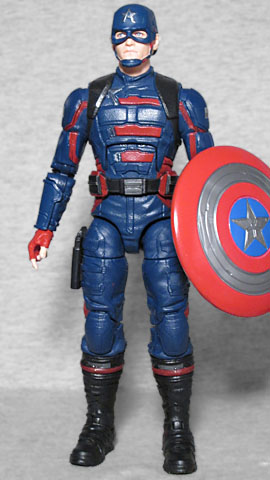 Before the USAgent we reviewed today was even announced, a different version was solicited and available for sale: the Walmart-exclusive "Captain America (John F. Walker)."

The mold is the same as before, just done in Cap's colors - this would have been a fine opportunity to bust out our recurring "he blue" joke, but there's more worth saying about him. It's impressive how well this costume hides the fact that its only real purpose is to be the basis for the USAgent suit; it's not until it's actually redone in black that the intention becomes clear. In blue, it just looks like something that was designed (by some government drone) to look "Captain America-ish" without directly copying any of Steve's clothes. After all, when you're replacing an American treasure, you're already going to be receiving enough pushback from the public at large, you don't want to do anything that will make them think you're literally trying to re-cast him.

The exclusive figure has the same utterly dopey masked head the mass release had,

and it still makes him look like a complete hayseed. But more importantly, this one comes with something the other did not: an unmasked John F. Walker head! Johnny's played by Wyatt Russell (son of Kurt Russell and Goldie Hawn), who's handsome enough in real life, but has a chin that looks like Bruce Campbell lent him a cup of jawbone, and it's that chin that somehow manages to look goofy when he's wearing the helmet. The figure's hair is a separate piece glued onto the head; his sideburns are lifting.

Since this figure represents Johnny when he was still Cap, he includes 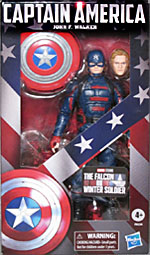 his hand-me-down shield. Or rather, his "donated to a museum, but taken by some a-hole senator who thought he knew better" shield. It's a new mold, with a flat star, an extra ring in the silver circle, and lots of detailing on the back (but no straps, and only a small molding artifact).

Surprisingly, the packaging looks nothing like the rest of the Disney+ Marvel Legends line - it's not even the usual ML shape! This is a plain rectangular box, with star-spangled graphics all around that fade to black as they get near the top. The backdrop behind the figure is a skyline, viewed from above, and colored red. It really looks like something that would make more sense for Homelander than Captain America.

John F. Walker may not have a piece of the Falcon Build-A-Figure, but he's got more accessories than the normal USAgent release, and some really stylish packaging as well.