We've repeatedly asked what "a science store" is and why the Science Alliance would be found there, but some stuff (the lower-end stuff, by scientific equipment standards) could totally be found at those super-expensive stores that sell, like, massage chairs and GPS-enabled kayaks. Today's BotBot is a prime example. 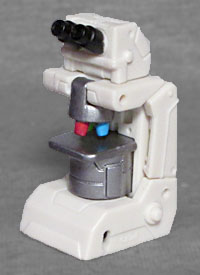 A Transformers microscope? It'll never work! Beginning with Series 5, Hasbro no longer included a map of the mall or instructions for the toys, or even released the official art of the characters any more. But the promotional photo of this one showed it being brown instead of white for some reason. How odd! This is a pretty standard tabletop microscope, the kind you could find in a typical school science classroom. It's got two eyepieces, and three lenses poised above the sample tray (though they don't rotate to give increased powers of magnification). They're different colors, however, so at least they stand out.

BotBots are usually easy to convert. This one just has a weird little quirk where when you're folding the "feet" out of the bottom, you also need to slide them down. It's easy to miss. 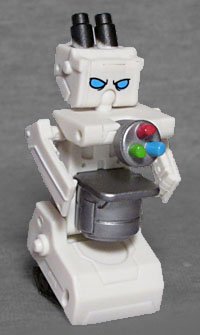 It's not Ee-Goon, it's Eye-Goon. He's very particular about that. If a mad scientist bot wants Eye-Goon to help him with his experiments, he better pronounce it right. Though, it won't make Eye-Goon a better lab assistant. He'll still come back from gathering the Energon for the experiment - with an energy drink. Easy mistake.

Was not expecting an extended Young Frankenstein gag! With his square head, tank-tread feet, straight arms, and microscope kibble on his stomach, Eye-Goon looks like a cross between Short Circuit's Johnny 5 and Nintendo's R.O.B. Also, because the scopes get rotated up in this mode, it looks like he has a cannon in his chest. Violent! This is definitely one of the most "robotic" robots in this line, but in a cute way. 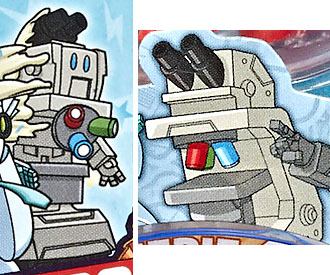 Eye-Goon is available in a Science Alliance 8-pack, or a Wilderness Troop 8-pack. The mold was also used to make Series 5's Special Optics.