Well, the world almost opened back up, but then didn't because of people too stupid to get a vaccine. (Those of you who couldn't for medical reasons don't count in this group, duh.) So we were very close to being able to go back out and enjoy public restaurants again, like the sort where the Transformers BotBots' Hibotchi Heats would have come from.

To Americans, ramen is just that stuff you boil in water and then dump a flavor packet on. 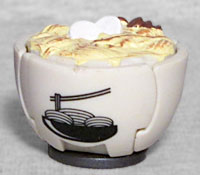 To people who know such things, ramen is a fine noodle soup that's easy to make and quick to eat, but has a complicated flavor profile - if our ramen is a McDonald's hamburger, the good stuff is a fine steak. In that sometimes it will have pieces of fine steak in it. This beige bowl has a restaurant logo on the front, and the top is sculpted with tons of noodles and a couple chunks of... white ingredient. Egg? Radish? Naruto? Something. A hole near the front seems like it was meant for an accessory - a pair of chopsticks, most likely. Lieutenant Lo Mein came with a set; are we just supposed to use his?

BotBots are intentionally easy to convert. Well, pulling the bottom of the bowl here down to form legs is hard, but it's not complex. Other than that, you just have to pull the arms to the sides without popping them off the balljoints, and lift the head without really being able to reach it. 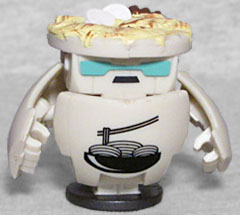 Rude? In Japan slurping your ramen is considered far from rude. It's perfectly natural. Slurp-A-Derp is a portly little 'bot, with his big hands and wide face joining his round body in making him look rotund. The hands are open to hold something, reinforcing the idea that we're missing an accessory, but not even early promo photos showed him with anything, so it must have been axed early.

Slurp-A-Derp is available in three 8-packs: one Frequent Flyers and two Hibotchi Heats. And all three have other Bots you can't readily get elsewhere, so you're likely to end up with multiples of him.