Back in the day, the Lost Bots were scattered all over the Transformers BotBots mall. For instance, if you look at the first wing of the mall, you'll find this little misfit down on the ground - fittingly, near the Toilet Troop's store. You didn't get very far lost at all, did you Clogstopper? 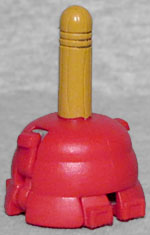 And honestly, what's with that name? I don't know about you, but when I've got a clog, what I really want is a clog un-stopper: it's already stopped up; that's the entire problem. Plungers seem like a quaint throwback to me, because my family didn't have one when I was growing up - they're just something that existed in old cartoons, like milk men or rotary phones. This is a pretty simple shape for a toy, just requiring a red cup with a tan stick. The handle is sculpted with a wood grain to make it look more realistic, so the only flaw (if you want to call it that) is that the plunger part can't be hollow, because that's where the robot hides.

BotBots are simple, so converting them is easy. Pull out the arms, turn them over, fold down the legs, and pull the entire body down out of the cap. 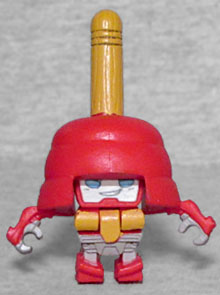 Clogstopper is the fixer. He goes where no bot wants to go to get the job done. He'll stick his face into any mess and get things working again. Just don't ask him to talk about what he's seen on the job. Ew.

"Ew" indeed. The way the two halves of the body are folded down from opposite directions to create the full thing is an interesting design, one that feels like something we would have seen way back in G1 when Transformers didn't have to move vey well (the only articulation here is the balljointed shoulders). Clogstopper has a fairly happy look on his face, but the plunger's bell is so large it tends to get lost in the shadows. 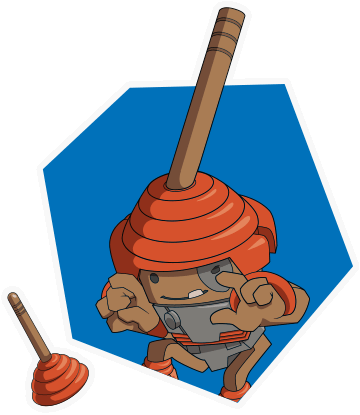 Clogstopper is available in a Sugar Shocks 5-pack, a Greaser Gang 8-pack, or a Jock Squad 8-pack.