The Transformers BotBots mall is pretty impressive: it has both a sporting goods store and a camping goods store. What is it, anchored by a Dick's at one end and an REI at the other? There are no more inserts showing the interior of the mall, so we're free to make up whatever we want for the Wilderness Troop.

I recall, as a kid, having a toy that changed from a robot into 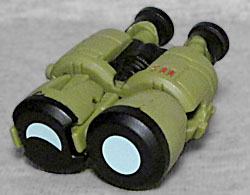 a (semi-)functional pair of binoculars. A little bit of research reveals it was sold in the US by a company called "Select" as part of their Convertors line - in other words, some cheap thing imported to ride Transformers and Go-Bots' coattails, which some caring relative fell for. It wouldn't be until 2007's Real Gear Robots that there was an official TF with that altmode, though that was a super fancy modern pair of binocs, while these are big ol' chunky classic ones. There are focus knobs sculpted on the top, and what's probably supposed to be a dangling strap underneath.

There also aren't any more instructions on how to convert the toys, so it's a good thing they're designed to be simple. Pull the left arm out to the side, fold the right arm down, slide the head over and point it forward, and raise the antennae on the sides.

Got a mystery? Goggly Spy P.I. is on the case. She's known for solving such famous mysteries as The Case of the Vanishing Toilet Seat 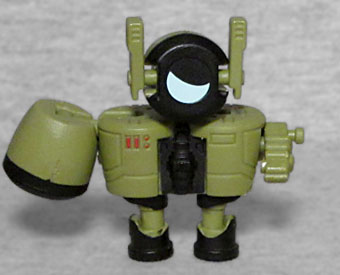 and The Case of the Lost Left Sock. With her super magnified private eye vision, Goggly Spy P.I. can see clues from a mile away. There's nothing she can't spot - except any clues right in front of her eyes.

Goggly Spy PI looks like a BotBots version of Shockwave: single eye on the head, antenna ears, a right had that's a weapon rather than a hand... she may be olive green, but a purple repaint would make it even more similar. Her eye is painted to look like there's a brow coming down over it, which is fine in this mode but makes the binoculars look a little weird. The tiny round feet make it hard to stand her unless she's got that giant gun-hand straight down at her side. 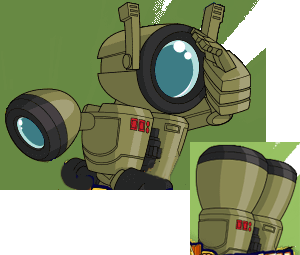 The detective is available in the Series 4 blind-packs, as #23, or a Wilderness Troop 8-pack.