One of the oddest trends in 2020 was the rise of the geeky advent calendar. You may recall we reviewed the one from Boss Fight Studio, but it was far from the only one available - many were even in normal stores, like Walmart or Target. They began showing up on shelves in late October, which in at least one case was a problem.

This set is based on a horror movie. And it's got 31 days, not 24 - so obviously this was not meant to be a Christmas calendar, but a Halloween calendar. Not much use on October 20th. But hey, there's nothing saying it's only good for a specific year, right? So buy one on post-holiday clearance, and store it away for next October! 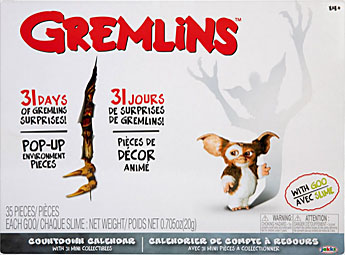 The Gremlins are on the loose! Help Gizmo find all the Gremlins and mean Mogwai before they find him and count down the days until Halloween with this mischieviously creepy Gremlins countdown calendar.

The 12" x 15⅞" box has the classic Gremlins design on the front, a mostly white image featuring Gizmo with Stripe's shadow behind him. A slash near the left hand side reveals a Gremlin peeking through at us. 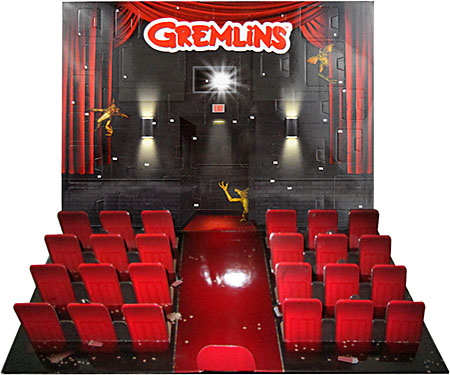 The front panel of the box folds down, creating a diorama of a movie theater: fold-up seats on the ground, and the projection booth on the back - in other words, they're gathering in this theater to watch you. All the numbered compartments are different sizes, arranged slightly at random - not a perfect grid, in other words. Let's go right ahead and check out Door #1!

Fittingly, the calendar begins where the franchise began: with Gizmo. The tray is shaped to hold him specifically, not just a square cubby that could hold anything at all, like we've seen elsewhere. The figurine is only ⅞" tall, which means he's basically done in a 6"-7" scale - something not even NECA's ever done! There's no articulation or anything, but this is the first time there's been a mogwai properly sized for interacting with humans. Hooray!