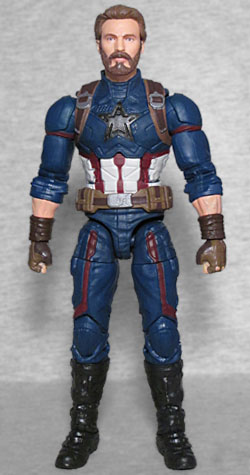 Armed with Wakandan Shields, Steve Rogers steps forward to defend the world from the impossible threat of Thanos and his minions.

Other than randomly capitalizing "shields" for no reason, that's a better bio than the last attempt - if only because it doesn't call him Captain America.

This is mostly the same molds as the 2018 figure. He's not missing a glove on his right arm this time, and he doesn't have an incorrect bare left hand. Generally when costume mistakes like that show up on a toy, it's because things changed between the concept art and the final costume design; but since this Infinity Saga line is coming out three years after the fact, they don't have the excuse of getting anything major wrong.

A new forearm isn't a reason to buy a toy

(especially since on mine, the right elbow is fused solid), but a head is. Two of them, in fact. That old toy was the first one that actually had something resembling a passable Chris Evans likeness,

but the hair was wrong, throwing off the look. This one gets it all right, though the head does feel slightly too large for the body? Just a little. Maybe it's the thick hair and the beautiful beard adding size to the overall shape, but it feels minorly incorrect. One of the included heads is calm and stoic, pure Steve Rogers, while the other is angrily gritting his teeth, a la the face-off scene with Thanos. 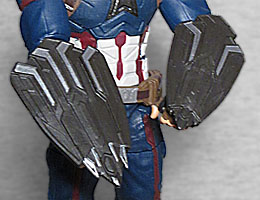 The other change made for this figure is his shield. The old one had the concept design, with the three large "claw" spikes on the end. This new version is what we saw in the film, and more than that, we actually get two of them instead of just one. One is expanded and one is collapsed, though the little one is missing a few silver paint apps - remember, they're both meant to be the same item, just in two different configurations, so what's silver on one should be silver on both. An easy custom fix.

This is an annoying figure, because while it's an improvement of the one we had to buy in 2018 to finish a Build-A-Figure, it's not such and improvement that it doesn't feel like you're double-dipping. Still, there's no question this one is better and is the one you want to get.