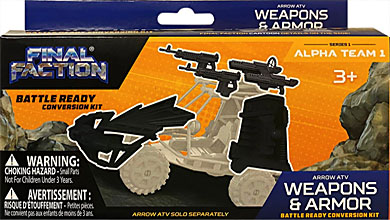 Okay, so the Arrow ATV was a cool little toy, but you have to question the safety of driving an open-canopied dune buggy into battle against weird aliens. Fortunately, the Weapons & Armor "battle ready conversion kit" is available to make things more secure.

Once upgraded with weapons and armor, the Arrow ATV instantly strikes fear into the heart of the Kharn. Weapons provide a powerful, high rate of fire and armor makes the Arrow ATV the ultimate assault vehicle. 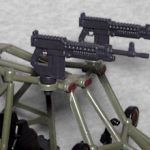 The pieces in this set don't get specific descriptions, but they do all at least get names. Up on the front corners of the roof, we've got the "Automatic Artillery Guns," a pair of matched rifles that could be removed and given to a figure to wield, if you wanted to (just have to ignore the large peg on the bottom). 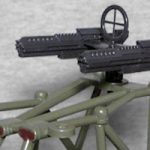 Behind that, the "Gatling Blaster" fails to live up to its name by not actually being a Gatling gun. Or even a multi-barrelled gun. In fact, the mold is mostly the same as the Long Range Weapons Pack's Spartan XP-109. Weird. This is one solid piece, but features two of the gun attached to a central arm with a targeting ring sticking out of the top. 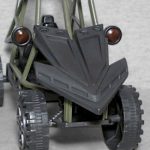 To protect the driver from frontal assaults, the "Deflector" snaps on and acts as a hood, meaning that while they may get shot in the face, they won't get shot in the legs or body. In case you missed the arrow shape of the roll bars before, this really accentuates it. 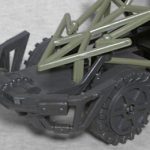 The "Barricade Bumper" hangs off the front, allowing the ATV to just bash through whatever stuff is in the way. A winch is sculpted at the very tip, complete with a sculpted cord and hook so you can pretend it's ready for rugged terrain. 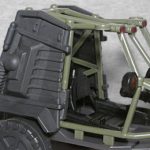 Finally, the "Engine Guards" fit on the sides, doing what the name implies. There's layered armor plating and some large tubes that suggest they're for removing the excess heat the new armor would otherwise prevent from escaping. Plus some little storage compartments up by the roofline!

All the pieces are unpainted grey plastic (unless you buy the Family Dollar box set), and getting the armor to snap onto the roll cage can be a true challenge, but the Arrow ATV looks even cooler loaded up than it already did. Buying the accessory kit may double the price of the toy, but that still means it's less than three bucks, and isn't that worth it? 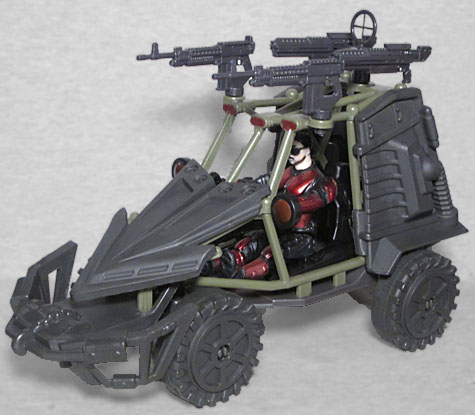