Today yo reviewed Kaiyodo/Xebec's Stealth Monev, and reproduced a portion of the text on the cardback. Here's the whole thing:

He is a gale; his barrage of bullets tears into the heart of enemy territory, mowing down everything without mercy. A silhouette of weapons that craved a body of flesh and were granted it. Monstrous gattling [sic] guns equipped on both of his arms and the belt links winding out from the guns are than the standard size. Those who witness him would have an eerie sense of surrealism and ell their doomed fate sinking into a bloody mist. Since childhood, he has possessed an exceptional physique and extraordinary abilities. Wagering on his potential, the organization bought him and trained him for over a decade to enhance his abilities for the sole purpose of making him a weapon. His muscles, developed almost to the point of being grotesque, are covered by metal laminated armor and hard points. A true commando: a specialist who has thorough knowledge and experience in using all weapons. He wears all the most powerful firearms that one human individual can possibly wear. His assault against his opponent is swift, violent and complete. He is unmatched and the strongest one-man army. The Gale. That is what this man, Monev, is called. He belongs to a group of super powered killers, the Gung-Ho-Guns. The smell of dripping oil and gun smoke as well as the sounds of metal creaking and a beast breathing... all melt into the darkness tonight. 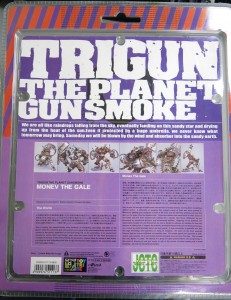 The World
Over a century has passed since hundreds of immigrating spaceships had fallen on the planet. Under the scorching dual suns and hot sand raging in the wind, people barely survive on the surface of the planet, dependent on the technology left on the spaceships. In an environment exposed to severe thirst and hunger, what rules this harsh world are the most fundamental concepts of survival. In the smell of blood and gunsmoke, violence takes the shape of lead bullets and rules the land. Entrusting their lives to ugly but beautiful steel weapons, the scoundrels begin their feast again today.

And now you know why we only copied some of it.

This entry was posted in addendums, Retro POA. Bookmark the permalink.