This is the latest in a series (of indefinite length and regularity) of blog posts memorializing cancelled toys. Our figure today is ToyBiz's Marvel Legends Series 14.

Obviously, ML14 has been released - we just reviewed the Build-A-Figure today. The variants might never make it to stores, but the toys do exist. However, rising oil costs took their toll, and we didn't get everything ToyBiz was planning: 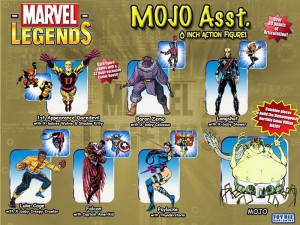 As you can see, not only were we also supposed to get a First Appearance Daredevil, but every figure in the series was meant to come with one of the X-Babies, the mini-mutants Mojo uses to fill airtime in his dimension:

Obviously none of those figures have ever been released in any form. If you want X-Babies (or Mitey 'Vengers), you'll have to look elsewhere.