When Thor opened in May, we passed the time in the week ahead of the premiere by reviewing the movie tie-in Minimates. Captain America: The First Avenger opens this Friday, so we're going to do the same thing again. But first, some art: 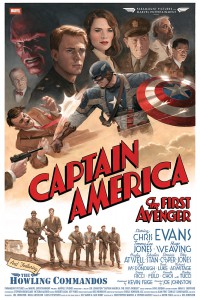 This awesome retro poster is the work of Paolo Rivero, and he goes into the whole story behind its creation on his blog. And now, on with the show! 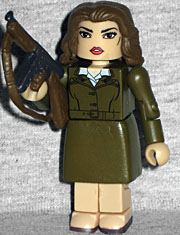 The aunt of Captain America's current-day flame Sharon Carter, Peggy Carter was a freedom fighter with the French Resistance during WWII. She and Cap worked together several times, but never learned each other's names before he was frozen. This figure is wearing a brown dress and a white blouse, and she has short brown shoes. The hair is a new piece, very detailed, but the face is a bit plain. She's lacking personality, you know? This isn't a girl who stares blankly ahead. Give her a smirk or something. She's armed with the same WWII Tommy gun we've seen before.

Howard Stark has appeared in three different movies, and he's been played by a different actor every time. He's Tony Stark's dad, a founding member of SHIELD, and was apparently involved in the Super Soldier Program. Who knew? He's wearing a grey double-breasted suit, made from a new chest cap with a shirt and tie built in. His only accessory is a grey fedora to replace his hair - it's taken from The Spirit set, but since nobody bought that, nobody is going to recognize it. He looks very dapper, and quite a bit young: is he even old enough to have that mustache? The hair seems to be a new piece - it's not the Spirit's - but it gets very hard to tell one random haircut from another.

Peggy and Howard aren't paired together: they're the variants for Series 40, and they each come packaged next to a Hydra Soldier. 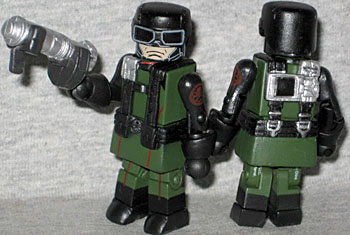 Rather than the solid black seen on the troops in the trailers, his costume gets hints of the green that Hydra wears in the comics. It's much darker, and there's no yellow, but it's there. The arms, cowl, boots and suspenders are black, while the pants and shirt are green with thin red stripes. It's kind of cool the way his webgear forms an H shape, same as it does in the comics. There's a black Hydra logo on the belt buckle and a red one on each shoulder. There are some technological panels on his suspenders that look slightly out of place, but maybe they're something from the movie.

The head is a little bit weird. It's fully painted with a mask and goggles, then there's a second cap and goggles worn above that. The heck? The Hydra Soldier comes with a large silver weapon that's designed to be held two-handed, but there's no way to actually fit it into two Minimate hands. Well, unless you use teamwork: two Minimates hoisting one bazooka.

Out of Howard Stark and Peggy Carter, I'm not sure which one is the standard figure and which one is the variant, but only because I don't care enough about the answer to bother looking it up. [It's Peggy, of course - the woman's got to be the rare one --ed.] They're both nice civilian figures (though Peg's a bit more action-packed than Howie, of course), and the Hydra Soldiers are the perfect army builder figure. This set is only available in the specialty market, so if you want it (and you do!) head to your local comicshop.