Grafterz - the McFarlane toy that never was

Here, courtesy former McFarlane VP of marketing and publishing (aka "VP of whatever needed to be done") Beau Smith, is a toy design for a product that never came to be. 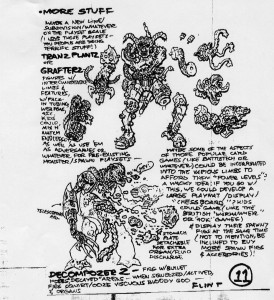 It's the work of Flint Henry, who's worked for Marvel, DC and many others, including time spent as a designer for McFarlane Toys. If you look at his intricate horror art, you can see his influence in a lot of the old Spawn toys.

Beau said that Todd was pleased with the design, but obviously nothing ever came of it. Why? Well, all we can do is guess, but probably logistics: interchangeable parts would be hard to engineer precisely across multiple figures, and it may have been too early for McToys to do things with internal goo - yes, "slime" playsets are a mainstay of the boys' toys industry, but McFarlane was still new to the game. And speaking of game, the idea to make these figures more like gamepieces was probably also daunting, since that would have meant either designing their own game mechanic, or buying one from a game company.

Anyway, it's cool to get a glimpse of a toy that almost was.

This entry was posted in cancelled toys, McFarlane. Bookmark the permalink.