Rustin's Spoils of the Week #35

Talk is cheap but toys are woefully not! 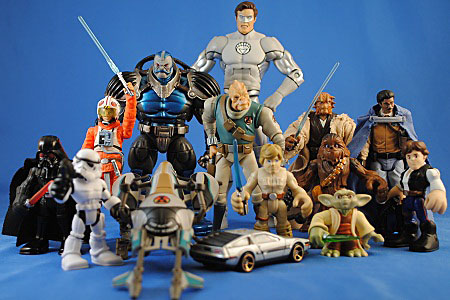 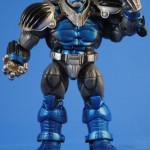 The long battle is over and I am the victor! Not only got this guy at retail but purchased him for the low price of only $7.99 I have nothing but Atlanta, Target and my dear friend KJR to thank for the mighty smiting of convention-swarming scalpers! I've been in love with Apocalypse ever since the second figure of him in ToyBiz's '90s X-Men line, and sadly no figure has since has really captured the coolness of that one (though the Minimate and Marvel Legends B.A.F. both come close). This one takes a more techno approach to the guy and fortunately he fares much better than the Marvel Legends carded figure. I'm not crazy about the Colossus-lookalike hands but the boots and collar are pretty cool. Production is pretty solid with decent paint and good articulation, though due to the scale and bulk the latter is not as impressive as one would like. For the $20-$25 scalpers want this is only an okay figure, but for the SRP of $8-$10 he's pretty cool! 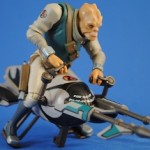 My ridiculous relationship with Clone Wars has been decently confronted previously so let's just say the only thing I'm more of a sucker for than Speeder Bikes is aliens, so in the common parlance of poker - I'm all in. The bike is pretty cool but definitely on the small side. It's not the best of the Deluxe Pack vehicles but a cool and serviceable little guy. It's got little "surprise" slide-out blaster in the side rockets which is a fun play feature. A really cool touch is that is the hand-grips on the handles are swivel-articulated allowing for better posing. The figure is vaguely Klingon-esque and I really love the cocked shoulders look - they really allow for a lot more cool/badass posing options than I expected. The bulbous head limits the range of articulation at the neck, but in all honestly this is a figure that I'll be posing standing and while probably just boxing the bike. 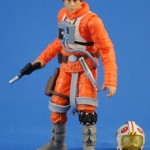 Much like the Hoth Han at the beginning of the current Vintage line this is a figure that was pretty exciting to me. I absolutely love that the Star Wars line has gone so long that we're doing costume changes this minimal. Unlike that Han (which was just a regular Han but with his Hoth Coat unzipped) though this figure is lacking one element which would totally complete him - grime. I didn't even notice it at first, but in the film Luke is all dirty when he exits the crashed X-Wing and this guy is not only clean but shiny too! It's really a bummer because this is probably the only release this costume will see. Other than being so darn orange this is a pretty cool retool that captures the scene pretty well. He has a new "skirt" for the untucked look, new forearms providing the ungloved look (no wrist articulation, just a swivel joint mid-forearm which is actually just fine) and a new head with a likeness on the better end of the Luke spectrum. Other than that this is the Hoth Pilot Luke figure that has been around for the last two years or so. This is one of the cooler Luke variants and recommendable for its brand-new-ness but I'd be lying if I said that non-dirty-ness is dangerously close to being a deal breaker. 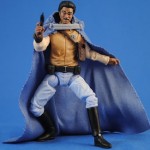 Oh General Lando... I've never been a big Lando fan and a significant chunk of that is due to his never having a cool a costume. While this is better than the '70s Swinger look in Empire it still just... I'm not sure. It just doesn't look much like a respectable uniform to me. And seriously - a cape? At any rate this is probably our signature General Lando for the better part of the next decade, and fortunately they pulled out all the stops giving us one of the more articulated and poseable figures in the line (which makes a lot of sense seeing as all the character does in Jedi is stand or sit). This is a perfect example of why I loathe softgoods - regardless of how solid the figure is he's horribly overshadowed by such a ridiculously oversized cape. The likeness is also on the weaker side, so I'd be down for a retool in a couple years with a sculpted cape and new head. It is pretty cool that gun is removable from the holster, though, which looks fine both with and without the gun. 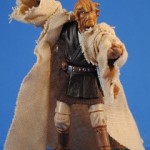 At one point I fancied that I would just buy anything related to the Genosis Arena to eventually have a nice big display. Not because I like the movie or scene, but just cause they make a lot from it. Plus it's one of the few things that ties into the fun Expanded Universe fantasy we all had as kids growing up on the Classic Trilogy - Jedi Army! Seeing as I had the original version of the character I was perfectly content to sit this out, but a sale at Toys R Us made this a much more reasonable purchase. Lousy with articulation and heavily detailed sculpt this is certainly a winner of a figure. He does lack balljointed hips and his softgoods cloak is too big but being a cloak is can be more easily overlooked than Lando's cape. This is a fun figure, but not a necessary one. 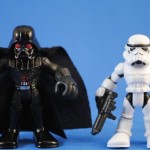 While I'm really digging this new Heroes aesthetic I'm not too crazy about how Vader translates into it. I'm not quite sure what it is but he doesn't really "pop" like I would expect him to. Conversely the Stormtrooper fits well in the look, but I've had a bear of a time tracking down one with good paint. Almost all the helmets I've seen have been messy at best. Sadly, black on white is very unforgiving and he suffers heartily. I understand this pairing but it is a bummer of a pack seeing as one is an army-builder. I think it would have been better to do Vader with a Captain or an Admiral and the Stormtrooper with a TIE Pilot or Death Star Trooper. Regardless this is pretty much a mandatory purchase if you're buying into this line and it's a fairly strong entry. 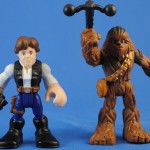 This is one the sets that really excels with the inclusion of articulation. This format features T-Crotch, swivel neck, balljointed shoulders and swivel wrists and the latter two (or three if we're being technical) really boost the fun factor on these guys. I'm never too crazy about cutesy faces but I do dig the stylized proportions of this format. These same figures are included with the Millenium Falcon vehicle/playset, which is nice in that it doesn't force a purchase on people either way, save but for the most hardcore of completists. 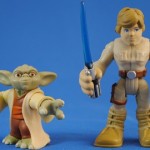 Love the Luke but hate the Yoda. Bespin Luke is my second favorite Luke costume and probably my... hmm... yeah I might just go as far as my second favorite costume in the Original Trilogy. This does a fine job of capturing and adapting it to the format, though the beige plastic is a little too close to the skintone. Not as close as it looks in this photo but still a bit too close for comfort. There is very little I hate more than Yoda with a lightsaber. That figure has no business being in the film line and especially in an OT pack - it belongs in the Clone Wars line if it all. 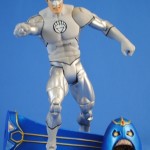 Hi, I'm Rustin and I am such a slut. What can one say that hasn't already been said? I'm just too much of a completist to have let this figure pass me by, despite the low quality of it and already having the great DC Direct version. It's nice they made the variant come with the Collect'n'Connect Head cause now I have a pseudo Bust rather than a useless leg or arm. This is practically a Gray Lantern, since they used such a dingy white plastic. 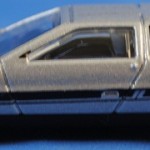 $0.79 at an Atlanta grocery store? Sold! Now that I have two whole Hot Wheels cars (this and the Back to the Future version) I'm starting to get what the attraction is to these things and why the Collectors of them are so passionate. So cheap and plentiful! For as much as I love the BttF Time Machine I don't have much affinity for the regular Delorean car. I think it's mainly the bland, grill-ish back window. Still though I'm very happy to have scored this and will happily add it to my BttF collection as a sort of "Before" photo of the Time Machine.

This entry was posted in DC, Hasbro, Marvel, Mattel, Rustin's Spoils of the Week and tagged Back to the Future, DCUC, Green Lantern, Marvel Universe, Star Wars, X-Men. Bookmark the permalink.

6 Responses to Rustin's Spoils of the Week #35