Every figure has one, most of the time they are specific to the toy and can certainly be a hot-button design issue, but what do you do with them? 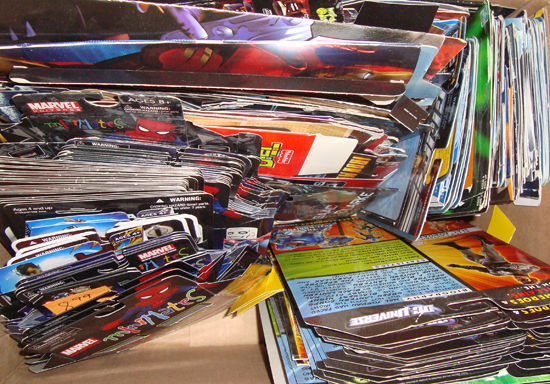 It all started with Teenage Mutant Ninja Turtles for me. Playmates took the "ID Card" premise from GI Joe and included one on each release. Somewhere on the pseudo Index Card graphic it said "cut out and save" so being the impressionable youth that I was, I did just that. In fact I remember being fairly heartbroken when I realized I had left my "Skateboarder Michelangelo" card at a Souplantion after dinner one night. Eventually it occurred to me that were I to keep the entire cardback not only would I maintain the Info Cards but I'd also get the pictures of other figures, this toy's accessories and the rest of the cool art all over the card - and thus, the game was forever changed.

Flash forward two decades and I have a (parents') attic full of cardbacks and still save every single one. A lot about collecting is tied into compulsive behavior, at least for, and thus it became of major importance to me to preserve the cards. In fact I open toys by slicing around the base of the bubble, over the seam glued to the card, in order to have little-to-no image tearing. I then toss all of the cards and boxes into a box to pretty much never look at again. I know this is kind of silly but part of me imagines one day I'll do something with them (like wallpaper a room or Man-Cave). Yet, to date I just have boxes of cardboard.

The dilemma comes into play as I prepare to move to Chicago to Los Angeles. When I moved out here I sucked it up and chucked most of the cardback boxes into the recycle, but once here the old habit picked back up. Having to pack up once more I am yet again directly confronted with a monetary cost to preserving this part of the collection and as such find myself wondering - do I want to?

Thus, dear readers, I turn to you! What do YOU do with your figures' cardbacks, boxes, packaging and so on? Save it all or just some it? Rip and toss it? Save a sample or buy a second figure to keep carded?

And what about all those little paper inserts from Hasbro and DST? 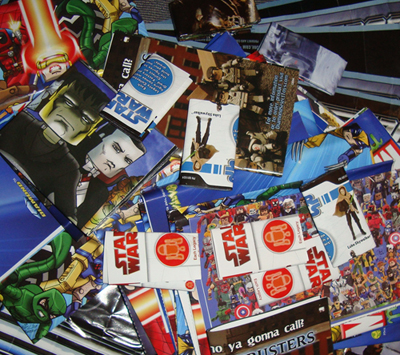 This entry was posted in commentary, DST, Hasbro, Playmates and tagged TMNT. Bookmark the permalink.

7 Responses to The Cardback Quandry