Rustin's Spoils of the Week #52

Legomageddon II: The Eternal Battle!!! More clearance sales, more stock-piling, more MOC-speculation, more Legos! I just love these little buggers, especially when they can be got for 20-50% off, because hey, this stuff gets expensive. 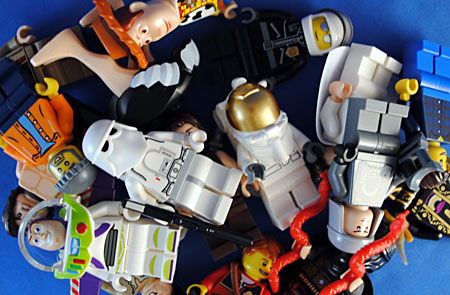 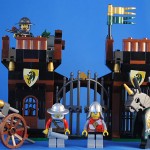 My quest to buy the Castle stuff I never did continues with this being one of the few sets that I found still on shelves post-Christmas. I had to not only pay full price but also Toys R Us' silly 20% markup for it, and it's a shame I did. This reminds me of a somewhat better version of what was around when I was a kid. It's just a micro castle, with all of the features but none of the size or scope. It's a nice way to get more soldiers and some specialized bricks like the gate and jail bars so its value is far more for adding on to other sets as opposed to standing on its own. 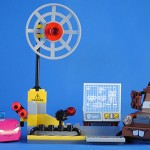 My original plan was to get this set for Mater and Girl back in the summer, but it was out of stock when I did my Cars binge so I ended up just getting the individual Mater which lessened the value of this one to me. But on markdown its fun. I like the color combos and while I'm not a fan of the Cars franchise, nor of these mini-figures, it is nice to add characters - and this is like "Spy Mater" with rockets and guns so at least he's somewhat different. The reality of the purchase, though, was mainly for the spy-gear setup as parts for my intended mega-Dino complex I hope to eventually build. It's off shelves now, but were it not it'd be a good set for fans, I feel. 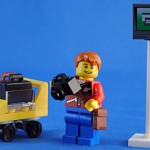 I got this little not-a-polybag set after my friend pointed out this guy's jacket has one of the Classic Saturn-esque Lego Space emblems on it. Thus, he's arguably an astronaut, or more entertainingly a fanboy en route to Space Camp! It's a very minimal build but you get some cool pieces like suitcases, a camera and a "flat screen" computer terminal. But the real fun and value is the Space jacket. 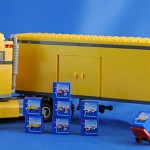 Oh man, toy's of toys delivering toys - how frickin' awesome! I've wanted this for awhile but couldn't pony up the cash until Clearance time, but you know what, it's pretty cool! The trailer is removable from the truck part and has working doors on the side and back. The truck is a surprisingly fun and cool looking build. The roof has a ratchet hinge so you can play with the cab, which is complete with computer and bed for those long, overnight hauls! The two mini-figs are bland, unremarkable and disappointing though. However the set comes with a bunch of Lego Sets! Certainly not enough to fill the trailer, and definitely proportionally incorrect for real Lego boxes, but come on... this toy is a truck delivering a toy version of itself - you can get no more meta than that! 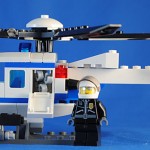 Picked this thing for $5, which is about the only way I'd end up with it. It's neat but nothing really special. To get the bland cop in or out of the cockpit you need to remove the whole roof/window assembly. On the plus side there are hinged boxes on either side for holding cop-gear, like handcuffs. All in all it's okay for what it is but it's mainly just part fodder for future builds, hence I did not bother with the application of the included stickers. 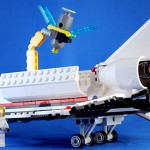 I dig Space Shuttles so was always tickled by this set but it took a sale to really close the deal for me, and you know what - it's really cool! It's nose has printed deco on it and interestingly the windows are all on one long blue "U" space piece that snaps into that cockpit/nose piece. The wings have hinged flaps, but the engine with translucent orange studs for exhaust is the real star. I love the curved parts on the tail, which help give it that signature Space Shuttle look! The body opens up via ratcheted joints and it can hold the satellite and has an articulated holding arm. Sadly the arm can't stay attached to the satellite while those bay doors are closed though. Add to this the cool Atlantis diving helmet cast in white with gold visor and you have a pretty darn cool set for any NASA fan. 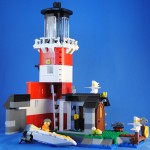 I first saw this thing in a display case at the Disney World Lego Store and thought it was so cool it must be a custom but imagine my excitement when I saw it was a new Creator set! Truth be told this is the second one I've bought because the marked-down price plus the cool build made it irresistible. The box shows three different builds from the included bricks, but the coolest is the "signature" lighthouse design. Surprisingly though each of the three advertised builds gets its own instruction booklet. I'm not too crazy about the little boat as the propeller hangs realistically low below the boat making it table un-friendly. However, the building has a hinged wall allowing for interior play, though it's a limited space, but the real highlight is the working light. It's a light brick aimed at a reflective silver sticker on a sloped brick which you turn via gear-works - very cool! The fisherman mini-fig is pretty nice too and there is a lot of fun things you can do with the several configurations. This is basically a perfect Lego set - cool builds and creatively inspiring. 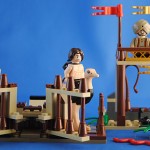 I haven't seen the film Prince of Persia because, well... why would you? But I am rightly tickled by how Disney merchandised the crap out of it and it all failed. I know many people were into this set for the Ostriches but really they held no charm for me. When I found for it $8 though I couldn't say no - three mini-figs, two ostriches and some neat bricks my other sets can probably absorb happily makes me a cheerful man! The gimmick of the set is a push action play feature that lets you open up the gates, loosing the ostriches. It's a neat idea but sticks a little too much to really be fun, and, of course, the ostriches just stand in place when the gates open... they are just toys. I need to come up with some comical mini-fig now to make use of that atrociously ridiculous "ripped" torso. 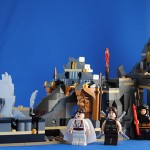 When I started building my ideal Lego Castle in my mind I knew I'd need plenty of rock work, so when I saw this it seemed like a perfect hit for me in that it's full of useful pieces for a Castle. I was completely unprepared for how cool this set was though! It's a much more intricate, fun, and lengthy build than it looks and it's final form looks much cooler than in the photos! What's even more surprising it has clever and cool play features in the form of sliding bricks that cause the giant buzzsaw and swords to flip in on the unsuspecting mini-figs. I really like this set after all and am tempted not to break it up. Things to note: it is built in two "halves" connected by Technic pegs which give it a flimsy feel when moving the whole thing and the light brick in the back wall can only be triggered through one of the Technic brick-holes and doesn't illuminate the translucent yellow section as fully as I had expected. Still a great set that is definitely worth the full price! 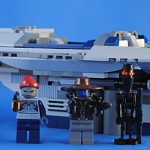 As much as I want to be a Original Trilogy purist I can't help but love things from the Expanded Universe like the Blue Troopers and the Clone Wars bounty hunters. I was in for this set primarily for the mini-figs as the Doug Chiang-esque speeder seems none-too-impressive for Bane to pal around in, but it does end up being a better build and toy than expected. It has six seats and the back part can flip open as a storage compartment. The two Blue Troopers use the same helmet piece but the one has added white deco to differentiate him. Since he's the leader it would be nice to have more troopers for him to command, but no such luck. Cad gets a unique hat but uses the Firemen "chin strap"-thing part while the not-IG-88s use the Battle Droid body and limbs but feature a clever if not out-of scale, build for the iconic head. I'll probably break the Speeder apart for Castle assimilation but the mini-figs are definitely a cool batch. 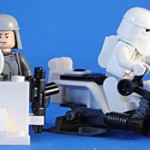 OT battle builders in the house! This is an okay set, pretty simple and uninspiring builds. The speederbike is cool, and while it makes a lot of sense for the battle if it doesn't appear on screen I have trouble accepting it. The mini-base is... well, fine for what it is. The highlight is, of course, the mini-figs. Snowtroopers are always welcome and the AT-AT Commander is fun, but lordy am I tired of AT-AT Drivers. I get the desire for variation in the line-up but come on... those guys have only one, highly specific job and I certainly don't want any without an AT-AT. I really wish it'd been a third Snowtrooper, and that they'd done an E-WEBB cannon rather than the pseudo base. Oh well. 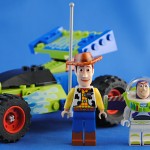 I have been eying this one for a long time but just couldn't jump on at the full price. I love the colors but I have so little interest in Lego cars, especially when they are like this one - a size-able body on which there is minimal build. That body provides a pull-back-and-go play feature, but it's not something I really want in Lego, though I will concede this set is not aimed at me. Woody and Buzz are pretty cool figures, but Woody's new "long" legs kind of creep me out, and his hat is glued on. I'm also not too crazy about the new heads for each character - what is this, MegaBloks? I get it though, and can't really imagine what they'd look like with regular mini-fig heads, I just don't want Legos with noses. The firecracker is a neat but not great. Overall it's a fun set from an iconic scene and while it doesn't blow me away I am quite happy to add it to the collection.

This entry was posted in Lego, Rustin's Spoils of the Week and tagged Star Wars, Toy Story. Bookmark the permalink.

5 Responses to Rustin's Spoils of the Week #52