Rustin's Spoils of the Week #54

We deviate from our regularly scheduled Spoils for some sweet, sweet Con-Haulage! Wonder-Con 2012 was this past weekend in cold, windy and rainy Anaheim, California, and it proved to be a surprisingly rich hunting ground. I invite you now, true believers, to take a big heaping bite of Con Spoilage, tout suite! 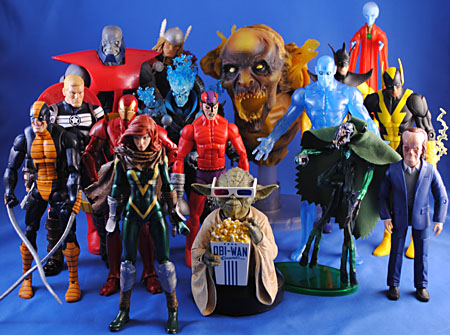 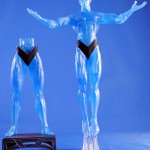 I've been looking for this "translucent" variant of Dr. Manhattan so long I'd started to think it was never released. Oddly enough I saw it for the first time between a box of old comics and a trash can. The box was bent and dusty, the sure-fire marks of one man's unsellable crap being another man's grail, and thus it was had for only $8. Much like the regular Manhattan, he comes with a base, a "fwooshing" transparent base alternate hovering and standing legs and a total lack of very necessary wrist articulation. What makes this guy different is that this one is cast in translucent blue plastic. In fact, it's translucent blue with a wispy pearlescent effect to it making for an excellent glowing look. I will now have "regular" Manhattan standing and Tranny Manhattan hovering. Now, if only I could rig up some blue LEDs to make him glow... 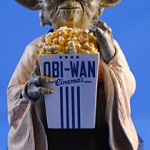 The one real exclusive not-print collectible for WonderCon essentially meant I had to get this, and you know what? Even though everyone I know has judged me harshly for the purchase I'm none-too-ashamed of it. Shocking, to be sure, especially considering that I'm the "I hate the popularity of Yoda" guy! The sculpt is quite good, which is expected from Gentle Giant, but far more detailed than their standard fare (which is usually my only complaint about their work). The popcorn box is permanently attached to the figure but the glasses are fully removable, though who would do as such? It's a piece limited to 1200 which doesn't seem like much less than the usual run of GG SW busts these days and at $65 it feels like a bit of a rip-off. So I'm just focusing on the novelty and the exclusivity to take the pain off that hit. 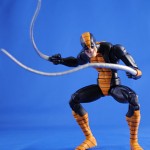 Look, what can I say... I really love these figures. Far more than I ever anticipated! This is, as I understand it, just a repaint with new forearms and head but you'd barely know it to look at it. I really like the head sculpt and, though the lines aren't the cleanest, the paint as well. It would have been nice to get the tentacles to be bendy, but all in all it's okay by me. He's a really smart pick because the costume is unique enough that it feels new and special enough though it's just a repaint. 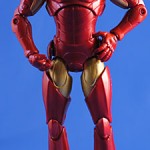 What a damn fine sculpt! I like my Iron Men thin and this one nails it. I really, really love the helmet sculpt - both wholly comic accurate yet somehow seems new and fresh. Again, surprisingly good paint considering how Hasbro's first waves of new lines usually roll out. The articulation is well worked into the design and is none too obtrusive. It even takes some clever twists like having the thigh twist being hidden under the red part. 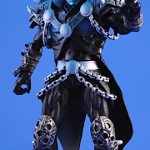 While I was none too excited to hear of the return of Marvel Legends this was the one figure I knew I'd be getting regardless of my interest in the brand. It's just cool, and a really smart semi-tent-pole for the return of the line. It's a fun new spin of the classic design and a very welcome addition. If I'm being honest, while the sculpt is great the blue doesn't quite work as well for me as I had hoped. I think the "glow"/frosting might be a bit too heavy. 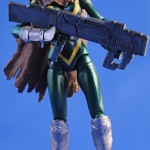 This is not the other "alternate timeline" Cyclops/Jean Grey daughter we got some figures of a couple years back and is the young-20s version of the baby that was impossible to find with the Marvel Universe Cable. But, you know what - I don't care cause I really dig this figure! The new gauntlet and boot pieces mixed with the red hair, brown cape and metallic green jumpsuit just make for a very visually striking figure. Sadly the hair is hard plastic and limits the neck articulation heartily and she can't really hold her giant gun too well, but I still really dig the figure nonetheless! 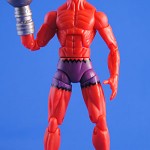 I had little-to-no knowledge of this bozo before the Marvel Universe figure in the Secret Wars two-packs and now I'm oddly exited to get him. The bright red costume really pops out in a fun way, though I wish it was paint rather than the slightly translucent plastic. His "sound dish" is kinda warped on mine but I dig the figure overall enough that it's not too much of a deal breaker. 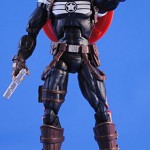 How the heck do I like this costume so much? Somehow, some way it just really works for me and I really like this figure. While not exactly "my" vision for Steve's face this my favorite Rogers Head ever produced. His guns are super cool and he holds them very well but his wrists are the only issue I have with the figure. They should be balljointed, like the other figures! Instead we just get a forearm swivel. Still though, this is absolutely one of the highlights on the series for me! 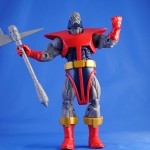 How cool is this BAF! Sure he's not as impressive as the old ToyBiz ones but I like his bulk and execution - though the sculpt favors genericism, clearly for future reuse. He gets his awesome, giant axe but sadly can't hold it too well. The skin is not textured in the sculpt at all but the heavy dark gray wash really does a great job of providing that cement/stone look from the comics. I especially love the head sculpt. If it's not Phil Ramirez's work then someone has figured out how to ape his "style" and we are all the richer for it. 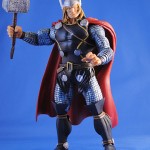 My god this is a huge figure! He's definitely thicker than the Marvel Select one, but probably not as tall. In fact he's so big I don't really mind that he gets no B.A.F. pieces. The MS figure made me fall in love with this costume and this sculpt lives up to those same standards. From the great mail armor to the wildly accurate face this is fantastic figure. The only issue with him is the conspicuously painted, not sculpted, on silver dots of his "loin cloth." Double jointed elbows would also have been nice but over all I really dig the heck out him. Marvel Legends is back and in a totally amazing way, if I do say so myself. 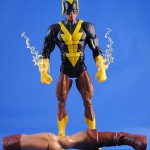 Not bad but definitely very weak as compared to the new Marvel Legends. While Hasbro has deftly hidden the rampant re-use on ML Mattel seems to revel in the cost savings and makes the re-use as noticeable as possible. I'm very happy he comes with the electro-bursts as it adds a lot to the figure - though honestly those will get harvested and donated to the "modern" Vulcan from a few years back. This whole series was such a misfire. It would have been much smarter to release El Dorado, Samurai, Black Vulcan and Apache Chief should have been a Con Exclusive multi-pack a la the Wonder Twins. 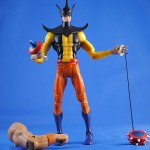 A fine entry but certainly one of the less interesting figures and a fine example of why I won't miss the line too much. I really don't have anything to complain about, but by the same token I don't have anything to rave about either. It's nice he gets accessories but the top, in particular, is forgettable box-fodder. A good enough sculpt and execution. 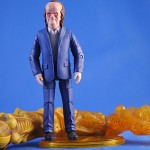 I am a slut. This figure is horrible, but I got him cause a booth was selling him for $15 and he's the "villain" of the movie. My guess is his bizarre shortness is a result to cost-share the waist down with Louis Tully but I don't have that figure handy to confirm. The head, though, is just... shocking. It's like the marching orders were "make Jakks product look amazing." 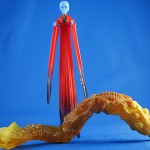 Ten bucks? Heck yes! I dig the Guardians and the price so I couldn't say no, but really should have. The figure is, like the whole line, worse that it looks. Three points of articulation, folks, and a slightly off-center balance. Really should have done this as a two-pack and just did the same figure twice but with two separate heads. 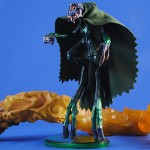 So the seller convinced me this was one of the last two figures to be released and my completist/fan-of-the-rare sense tingled to the price of $18. Ugh. Such a bad figure. Well, that's not fair - it's an okay figure (decent sculpt and paint with balljoints at the "ankles," knees and shoulders, hinged elbows, V-crotch and swivel neck) but just a totally pointless one. Maybe this guy had 30 seconds of screen time. Bad show Neitlich, bad show. 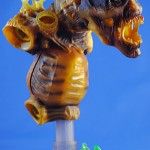 Sure... even though he cost me $18 the fact it was released and that I found was enough to purchase - if nothing else it justifies all those effin' worthless tentacles from the other figures. Surprisingly unsurprising is that this thing is lamer than it looks. The face is a rubber shell that fits on the neck piece which plugs into the torso that has a separate rubber piece for the chest to make him look "hollow" - oooh, aah. Embarrassment. I really feel bad for Neitlich - how did he ever possibly think Green Lantern would be popular enough to warrant this deluge shockingly mediocre product?

14 Responses to Rustin's Spoils of the Week #54