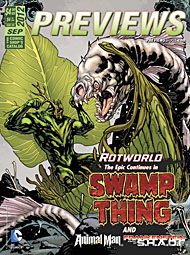 It's time once again to thumb through the toy section of this month's Previews, and see what goodies we can uncover. Scheduled to start shipping in November.

We get things started with a comic this time: DC's Ame-Comi Girls #2 is listed on page 122.

Okay, MLP fans - Friendship is Magic is getting an ongoing comic from IDW, and you can order one of SEVEN different covers on page 155.

IDW's GI Joe comics are on page 158-160, and the Transformers on pages 162/3. You can also order a tpb of Infestation 2 on page 177, in which both those properties fight Cthulhu.

Page 370 offers Star Wars: The Ultimate Action Figure Collection by Steve Sansweet, tracing the history of the toys over the past 35 years.

The first series of Battle Beasts figures are listed on page 390. And right next to that on 391, Marvel Minimates Series 48, which is Fantastic Four-themed.

The first Star Trek Select figure, Spock, is shown on page 395. Look at those interchangeable bodyparts!

Mattel's next crack at Gotham City, Batman Unlimited, is on page 399. It's Batman, Batgirl and Penguin.

Then, on page 400, DC Unlimited, with Flash, Superman and Hawkman in their New 52 versions.

Marvel Universe comic packs are listed on page 403, but there are no specifics as to what the pairs will be.

Over on page 406, NECA's Prometheus and ET Series 2 toys can be seen.

Page 407 lists the final series of Star Wars Vintage figures, which will ONLY be available through outlets like this, not in stores.