Tony Stark was born with extremely high intelligence, he graduated 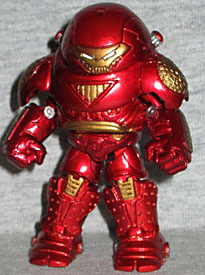 MIT at a young age and took over Stark Industries when he was just 21. While visiting a far east Stark plant, an explosion sent a piece of shrapnel dangerously close to his heart. This potentially fatal condition lead to the creation of his first Iron Man suit. Through the years Tony has created numerous new suits including one to take on the unstoppable Hulk.

Everybody loves the Hulkbuster Armor - so why, then, was it only available as a Toys Я Us exclusive? There's a Minimate body deep in the core of the figure, but it's covered by lots of new bits. It's impressively detailed, and in this case sculpted pieces work better than paint would have: remember, Hulkbuster is actually a suit worn over his usual armor, so they really are pieces he adds on.

Like the Marvel Legends version, the helmet flips up to reveal a head beneath. This time it's not a bare Tony head; remembering how the Hulkbuster armor works, we get to see evidence of the Extremis Armor. Okay, it should be the Modular Armor, but hey, close enough. If you pull the chest cap off, the torso gets armor detail paint apps as well. You'd just have to find some replacement hands and feet for him.

Supervising the trial of an experimental gamma bomb for the Department of Defense at a remote testing ground in New Mexico, Dr. Bruce Banner rushed to rescue 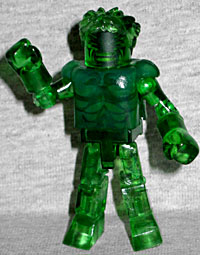 teenager Rick Jones after he strayed into the test area. But in saving young Jones' life, Banner himself was bathed in gamma energy, eventually giving rise to The Incredible Hulk!

Remember two solid years ago when we mini-reviewed Gamma Hulk and said there was another trans green Hulk with the same name? Well here he is! Hey, we're actually making pretty good time! This Gamma Hulk doesn't share his paint masks with any other figures, not that it would matter if he did - the plastic and the paint are nearly the same color, so you can't really make out the details. He could really use some solid white and black to make the design pop. He has Zombie Hulk's hair, a powerhouse chest, a waist cap, Ultimate Hulk's fists, and duck feet. The set also includes normal Minimate hands and feet, but this is still a very unimpressive Hulk.