When artists need to create a face, it's easier to use a real-life reference than to make something up. Alex Ross paints his friends and family into his works, and toy sculptors put themselves and their co-workers into the toys. So here, like our list of directors who were turned into toys, are some examples of toys featuring toymakers:

The first such instance that toy fans became aware of was, of course, the famous Steve the Victim figure, from McFarlane Toys.

Of course, the Four Horsemen have all been made into figures: 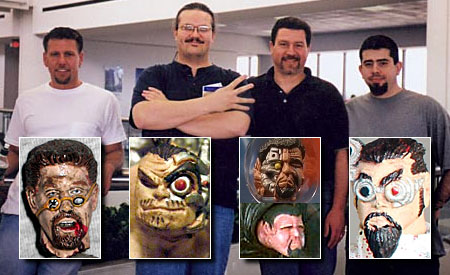 That's Chris Dahlberg as Leatherface's bucket-head, H. Eric Mayse as Total Chaos Cornboy, Jim Preziosi as both the variant head with the yellow version of Spawn Series 7 No-Body and a super-rare variant on the Monsters Hunchback, and Eric Treadaway as Dr. Frankenstein.

Surely you recognize ToyBiz's Jesse Falcon, who had his face laser-scanned for the Elvish Archer vs. Berserker Uruk-hai two-pack. but did you know ToyBiz's Damon Nee underwent the same process to become the Prologue Elf?

Jesse got the idea to put their faces on toys when he heard that the GI Joe team had done that in the '80s for guys like Kirk Bozigian, who became Law, and Vinnie D'Alleva, who lent his likeness to Cesspool.

And the trend continues today, with Hasbro's VP of Global Brand Management, Derryl DePriest, serving as the inspiration for the Oktober Guard's Iron Bear.

The Plan-B Toys crew did something similar: 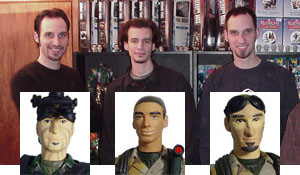 That's Jay Borman, Tony Simione and Chris Borman, the three co-presidents of the company. They didn't keep the fun for themselves, either: they made Special Forces heads for the guys they worked with, as well:

Here we see Jonathan Matthews, a name best known these days for turning out a lot of DC Direct's product.

And here's Shawn Knapp, another DCD guy (he does a lot of props and accessories). He's now "Art Director, Product Design and Engineering" for DC Entertainment Creative Affairs.

We've told you before how Nelson Asencio was the guy who developed the Minimate form, and was the inspiration for Iron Man's face.

The face of "The Goddess" from Spawn Series 9 (Manga Spawn) was modeled on Kathy Faline of AEB & Associates, one of the groups that worked for McFarlane Toys. We can't find a picture of her, but knowing McToys, she looks almost exactly like that toy over there.

According to Spawn.com, "the torso on the Al Simmons base from Series 17 is sculptor Kyle." Until such time as Tankman opts to pluck out his left eye and shed weight like Christian Bale in The Machinist, we'll take their word for it.

The head that came with the Chatter Beast was apparently based on art director Ed Repka.

If you hate Scott Neitlich's condescending attitude, buy an Eternian Palace Guard and use it like a voodoo doll.

If you know any more examples, let us know. (And if you have better pictures of some of those guys, too.)