It's some typically Peter Parkerish bad luck that this figure came out just in time for his comic to be cancelled. 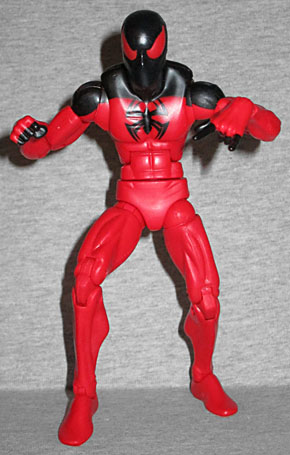 Does the mask of the Scarlet Spider hide a hero or a sinister imposter?

A hero. It's the normal Spider-Man mask that's currently hiding a sinister imposter.

Part of Marvel Legends Series 5 (the one with Rocket Raccoon, for those of you keeping track at home), Scarlet Spider is the same mold as the ML2 FF/Big Time Spider-Man figure, which makes sense: the guy inside the suit - Kaine - is a clone of Peter Parker, so why wouldn't he have the same type of body? We really wish Hasbro would finally fix whatever is wrong with this body's waist, though: for all the years they've been releasing it, the groin has been slightly wider than the lower torso, creating a little "shelf" where there should be none.

Another reason it's fine that Hasbro used the "Big Time" costume 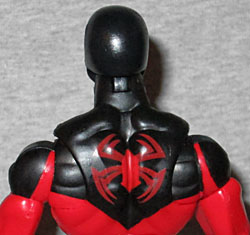 is that this technically is the Big Time costume. Kaine borrowed the suit during the Spider-Island crossover, and never bothered to return it; he just uses its optical abilities to make a different design. Artist Ryan Stegman is the one who came up with this look, and it's a really stylish look. The bulk of the suit is red (helping sell the "Scarlet" part of his name), but with black on the head and shoulders (almost a reverse of the Ultimate Spider-Man costume). The eyes of the suit are red, and so is the spider on his back; since the black section doesn't come down too far past his neck, the symbol on his chest is dark. He's also got black on all his fingers (though the toy is missing the black on the soles of his boots). Again, really sharp design.

Knowing how poor the distribution of Marvel Legends has been lately (and how bad the mark-up has been when stores do get them), I ordered the figures I wanted from Hasbro Toy Shop - the three needed for the BAF, plus Hawkguy. I didn't care enough about Scarlet Spider to order him, even when he was available below retail on Amazon, but I was so excited to see ML5 show up at Walmart that I bought him immediately. The toy is okay, but not anything to write home about (or even write full reviews about) unless you're a big fan of the character.