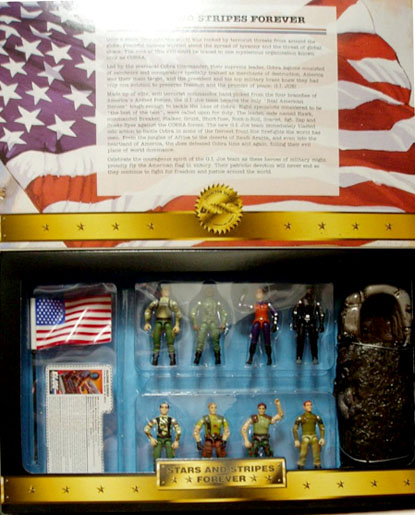 Only a short time ago, the world was rocked by terrorist threats from around the globe. Peaceful nations worried about the spread of tyranny and the threat of global chaos. The root of this evil could be traced to one mysterious organization known only as Cobra.

Led by the maniacal Cobra Commander, their supreme leader, Cobra legions consisted of saboteurs and conspirators specially trained as merchants of destruction. America was their main target, and the president and his top military brass knew they had only one solution to preserve freedom and the promise of peace: GI Joe!

Made up of elite, anti-terrorist commandos hand picked from the four branches of America's Armed Forces, the GI Joe team became the only "Real American Heroes" tough enough to tackle the likes of Cobra. Eight specialists considered to be "the best of the best," were called upon for duty. The leader, code named Hawk, commanded Breaker, Stalker, Grunt, Short-Fuse, Rock-n-Roll, Scarlett, Sgt. Zap and Snake-Eyes against the Cobra forces. The new GI Joe team immediately blasted into action to battle Cobra in some of the fiercest front-line firefights the world has seen. From the jungles of Africa to the deserts of Saudi Arabia, and even into the heartland of America, the Joes defeated Cobra time and again, foiling their evil plans of world dominance.

Celebrate the courageous spirit of the GI Joe team as these heroes of military might proudly fly the American flag in victory. Their patriotic devotion will never end as they continue to fight for freedom and justice around the world.