Behold, ye mighty legion - it is the doom what came to San Diego Comic Con 2012. It comes in many forms. It rides in the guise of the mate, it flies the shrowd of miniaturism. It knows heart - your desires, your weaknesses. It is the the ending. It is the beginning. It is... the MINIMAPOCAYPSE!!! 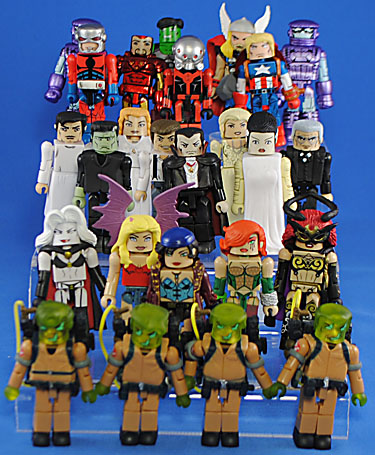 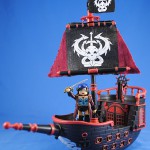 I'm generally against "sexy chicks for the sake of sexy chicks" figures but I can roll with the somewhat era-appropriate corset/bustier, but the maroon overcoat helps take the eye-roll of the panties. Her boots are actually some front flaps coming off of a piece that fits between the foot and the leg which is a fairly neat solution. She comes with a sword and a coiled whip and frankly just kind of rocks it. The ship itself is identical to the first Pirate Ship (and the awesome GITD ship, for that matter) so it carries over the many strengths and weaknesses from those as well. What sets it apart is, like Anne, the dark colors - black with red trim. There is a very elaborate, very modern looking skull logo on the bow and a fairly intricate insignia on the flags. Calico Jack's Pirate Raiders was a line with its heart in the right place, but in execution it seemed to be very unsure of what it was, regardless this is a strong entry in the line and in the Minimate format. 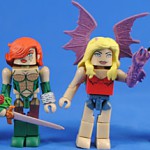 This is second boxset of female "indie comics" characters that DST has released and the first of two box sets under the Femme Fatales banner, used for a line of varied "sexy chick" statues. Here we get four characters of various levels of fame from the world of independent comics, and in fact three of the them have had product sculpted and released by Moore Action Collectibles "back in the day," so it's kind of like this is a MAC homage set. Like all characters in this set my knowledge of Dawn began (and really ends, to be honest) with action figures of them back during the '90s and '00s. She gets a new hairpiece (the head does have both eyes painted on), new sword plus new chain and rose wrist bands. She's the best of the set for me - the Minimate format at its best. Darkchylde gets a new left forearm for the signature "demon hand" and a new hair piece into which her wings are glued. Lady Death seems like the most iconic figure in the set. She comes with a new sword, hair, and cape. Both of those make her back-heavy and thus a bit difficult to get standing. All I know about Tarot is that the makers of the comic made a big announcement about, and even showed prototypes, of DST doing Minimates, figures and statues from the comic - to which everyone said "who's Tarot?" This 'mate does a good job of capturing the look of the character. She gets a new hair/mask piece as well as a new cape, sword and scabbard. The sword is packed in the scabbard so it's a bit of a nice surprise once you open the figures. 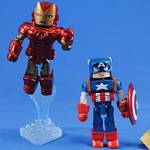 Marvel Minimates Series 44 kicks off its Avengers theme with this pairing of some fairly heavy hitters, both which were also available in Disney Store exclusive 4-packs. Iron Man is a pretty great new armor to Minimates. The gold and red colors are fairly dark shades, which is a bummer, and some of the gold paint apps are missing based on the packaging art, but he turned out petty cool nonetheless. His face is painted on the head under the helmet as though he's wearing a metallic red cowl. Captain America is... just another Cap. The chest art is pretty darn nice and he comes with an alternate hairpiece, shoulder straps to carry his shield on his back, and his shield... of course. Annoyingly this is yet another Cap that include no alternate left glove so with the shield on his back it still sports its straps and a peg. I like the figure but really there is nothing special about him amid the myriad other Caps. 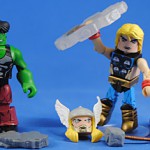 These two figure were also available in the Disney Store boxsets. Smart Hulk is one of my favorite designs for Hulk, but without the small head it doesn't quite look right. Sadly there is no paint under his bulky pieces so you get only the one look, and he gets two confusing-as-hell rock slabs that aren't stands and can't be held. Conversely, Thor is fairly awesome and a perfect Minimate! He comes with both Mjolnir and spinning Mjolnir, a cape and an alternate head and hair piece. The no-helmet hair doesn't fit with the cape but I ain't complaining because he's got a beard-y head and a fresh-faced head - so you could pretty much mix'n'match Thor variations till the Frost Giants come home. Plus he has very art-y torso deco that looks super cool! 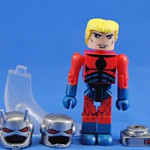 Giant Man, aka Hank Pym, is ALSO available in one of the Disney Store sets, but that's great because he has even more variable configurations than Thor! He comes with blonde hair, the Giant Man helmet, the Ant Man helmet plus a torso extending belt, "tall" feet and slipper feet to suggest the various heights. Flaw... wait for it... LESS. Flawless! Minimate perfection! He comes packed with a Kree Sentry that is a repaint of the latest Juggernaut but with a new helmet, plus a flight stand (but no extra deco under the bulk pieces). I definitely need to get at least one more of these for a third Hank Pym! 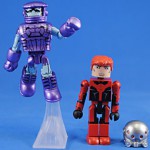 Finally, the variant set for this series includes two wholly unique to the series figures. The Kree Sentry is identical to the one with Hank above. I'm given to understand these are meant to be giants, about Sentinel size, but I'm fine with the cheated scale. They're just neat looking Kirby, or Kirby-esque, robots. Scott Lang, aka Ant-Man II, comes with his unique bodysuit and interchangeable red hair and a pretty cool Ant Man helmet. For some reason he reminds me a lot of Penance form the Thunderbolts set... but who knows why. 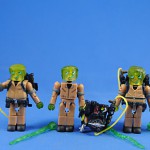 DST puts a feather in the cap of their excellent Real Ghostbusters line with this fun pack of repaints that roughly puts the animated costumes in movie colors. I had hoped this set would come with normal, flesh tone heads and hands for the guys too but no such luck. Fortunately that could be easily customized using the previous figures. What we do get are the heads, hair, hands and proton streams all cast in translucent green (though the proton streams are a different shade). The heads, hands and hair have a matte finish that not only looks pretty good but helps make the spooky faces a bit more visible. On the downside the animated proton wands are too wide to really fit the proton streams without some hearty forcing, but on the plus side the torsos have my beloved "casual jumpsuit" look allowing for some display variation. Oooh! I wonder how the movie heads look on the casual bodies... that could be a great way to mix things up over there too! 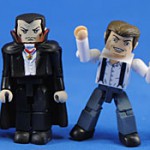 Here is another excellent Universal Movie Monsters 4-pack from the movie that started it all! We get Mina Harker in a stark white dress with some little sculpted details and a removable shall. There's an awesome Renfield as played by Dwight Frye. The real highlight though is Van Helsing with an unmistakable Edward Van Sloan likeness - he's one of, if not, my favorite Van Helsings. The real bummer of the set, though, is the titular figure of Dracula. Clearly DST wasn't able to secure the notoriously difficult likeness rights from the Lugosi estate, so rather than "getting close enough" they just went hardcore off the generic style guide, as with the disappointing Universal Select figures. The very caricatured style of his face is so out of place amongst the other three figures that is VERY distracting to me. 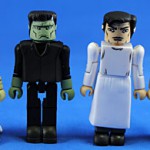 This set... is annoying as hell. It's billed as being from Frankenstein and yet it's clearly mashed with The Bride of Frankenstein, two equally popular and iconic films that could have fully supported their own 4-packs. This is just the the Back to the Future four packs where the character selection is so off the set is more notable for what's missing than for what's included. Elizabeth is the fun kind of "extra" character whose inclusion has made these 4-packs so neat for fans like myself. Victor is great, particularly since he's in the operating gown! Frankenstien('s Creature) is good, but somehow feels a little bland. He gets a uniquely sculpted head with hair and the brow ridge, which I'm not convinced was necessary - especially since, even with unique new platform boots, he's not taller than the others in the set. Finally we get the iconic Bride with a new hairpiece and gown, though the gown has the suggestion of sculpted breasts which is VERY out of place for the line. As is, it's an okay set. This line-up should have been released as Frankenstein with Fritz replacing the Bride, and then followed or paired with a Bride set that replaces Elizabeth with fan-favorite Dr. Praetorius and Victor with the Old Blind Man!

5 Responses to Rustin's Spoils of the Week #129