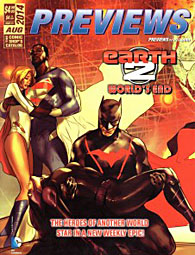 It's time once again to thumb through the toy section of this month's Previews, and see what goodies we can uncover. Scheduled to start shipping in October.

This is not traditionally toy-related, but Predator: Fire and Stone, on page 36, is the comic NECA's SDCC exclusive was based on.

There are animated Aquaman toys on page 145. Aquaman is getting a cartoon movie?

The next series of Greg Capullo Batman figures has Year One Batman, Batgirl, Commissioner Gordon, and Two-Face. See them on 147.

Page 243 has a bunch of McFarlane stuff: Walking Dead, Assassin's Creed, and sports.

A second set of Sin City Minimates is listed on page 472.

There are DC Mez-Itz five-packs on page 484: one based on the Batman TV show, the other on general DC characters.

NECA's videogame Rocky can be ordered on page 489.

There are 1/100 scale, fully transformable Robotech toys on page 492!

The Teenage Mutant Ninja Turtles are getting Superhero Squad-style toys, apparently. To go page 493 to see them.