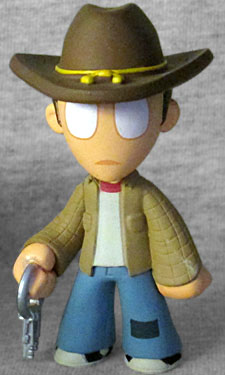 This figure is obviously taken from the survivors' time at the prison, because Carl is carrying a set of jailhouse keys. He's also wearing his dad's hat, though it's a new sculpt - slightly smaller than the one on Rick's head, which makes sense, since Carl's head is also slightly smaller than Rick's. Also, he doesn't have the sheriff's star on there any more, which I didn't realize was accurate to the show until I looked it up. Sadly, he's not wearing his "Coral" outfit - instead, he's wearing

his Science Dog T-shirt (minus the logo, but the red collar gives it away) under a long-sleeved plaid shirt. He also appears to be wearing a vest, since the plaid pattern is only sculpted on the arms, but the sleeves and torso are both painted the same tan color. Meanwhile, they bothered to paint the patch on his left knee, because why wouldn't they?