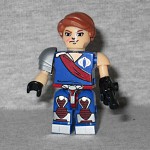 to offer. But it took so long for them to come out that I was no longer carrying around my cheat sheet! I always use our decoder, and write down which numbers I want to get, but I'd given up hope of ever finding them in the wild. So I gambled on my memory, and picked up figure #04: Tomax!

The Joes don't get cute bios the way Transformers do, but come on, you know Tomax: he and his brother's psychic connection is already silly enough that there isn't a lot of room to soften things without getting too ridiculous.

Tomax gets a new piece of silver shoulder armor, which will be nice if they ever get around to making a Zartan Kreon. He has complicated tampographs on his legs, to create those red and silver cobra-head kneepads the Paolis always wore. He has a complex silver belt painted on, and a red and silver codpiece. His red sash is present here, both on the front and back of his chest block - it runs over his right shoulder, and there's a silver Cobra sigil over his heart. They even remembered to make his left glove bigger than his right! The only flaw? A scar painted on his cheek - that was Xamot's thing.

He comes with a gun, of course, but that's de rigueur for this line. What's really cool is that he comes with two grappling hooks, a length of black string, and a gray handle that can slide back and forth along it. That's a nod to the zipline the original 1985 versions came with - how fun!

It's kind of ridiculous that Hasbro would do Tomax, but not Xamot. He'd darn well be in one of the upcoming series, or there's going to be trouble!