The Atlantic recently posted an interesting article titled The Toys That Send Kids to the Emergency Room. 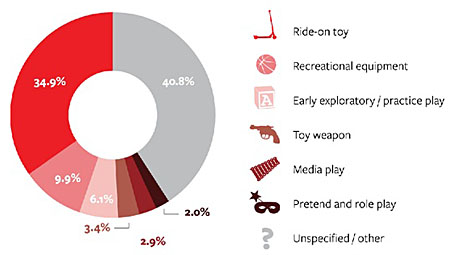 A paper published in Clinical Pediatrics compiled 20 years of hospital data for toy-related injuries. According to the paper, on average, a child receives emergency room treatment for a toy-related injury every three minutes.

But it's more than just the ride-on toys that are potentially dangerous. Every year, James Swartz and his group W.A.T.C.H. - World Against Toys Causing Harm - release a list of the top 10 most dangerous toys on the market. Swartz's late father, Ed, founded the organization in the '70s to raise awareness of the issues. As his father became more involved in advocacy, toys started disappearing from James's toy box as he grew up. "A lot of sweaters as gifts growing up," he says.

(Thus proving that being a killjoy to your kids is an inheritable trait.)