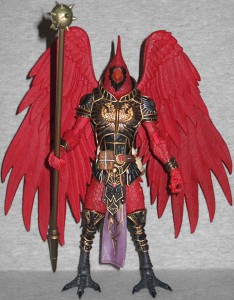 When the Four Horsemen launched their Kickstarter, they had six birds ready to go - the raven, of course, but also five others. Our fourth variant is "Cardinus," based, of course, on a cardinal. The bird, not the priest. Though the bird is named after the priest, because of its colors. The churchy ones wear red.

Cardinus has red plumage, offset beautifully by black and gold armor. That means he's also the first variant bird whose weapon - a staff with the spiked mace head on one end, and a sharp spike on the other - really looks like it belongs to him, rather than

just being something he was handed. His loincloth is purple, which we have to assume is a color joke. His feet are dark grey.

The cardinal head is pretty good, with one exception: the feathers on the top of his head. A cardinal's crest doesn't stick straight up, like this toy's does, it points toward the back. So Cardinus looks better from the front than from the sides. He's got a nice short beak, painted gloss orange, and there are black feathers around it and his eyes.

Also, since the Horsemen already had this head, we're surprised they didn't make a blue jay, too.