Bill made her into a killer. Pai Mei made her into a living weapon. And Hattori Hanzo gave her the finest sword known to man. Beatrix Kiddo learned from the best, and now the people who betrayed her, including Bill himself, will know her revenge.

Since we already had a Bride in the first set, that's why this one's got her real name, instead of just "The Bride," too. This isn't her iconic outfit, this is a more "civilian" version - 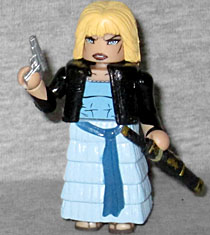 her "let's go find Bill" outfit: a blue tank top and a frilly skirt, with a dark blue sash/belt hanging from the waist (a new piece). She's packaged wearing her black leather jacket, which includes painted cut-outs on her forearms to suggest the way the sleeves split (though they should be on the outside, not the inside). If you prefer bare arms, the set includes a pair. She's got an even angrier face than the last Bride, and new hair. Although we pointed out in the last review that her scabbard was molded incorrectly, there hasn't been time to correct the mistake yet, so the error persists here. I'm sure they'll get to it eventually. Kind of disappointed she can't strap the scabbard to her back somehow, but that's not enough to annoy me. She's also armed with a pistol, because that's what she took with her to, you know, kill Bill.

And hey, here's Bill now! He's wearing his outfit from the end 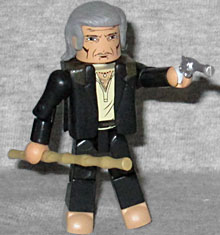 of the film: a black jacket with a complex brown pattern over the shoulders, a cream-colored shirt that's open far enough to show off his chest hair and necklace, and black pants with no shoes. Bill, keepin' it casual! He has a decent David Carradine likeness, and a full head of flowing hair. He comes with his sword, but no scabbard - the sculpt of this sword is the same as the Bride's, because they're too small to worry about differentiating. He has his revolver - a new mold - but don't expect a holster to put it in; there's a brown belt painted on his waist, but no actual holster. The coolest bit, though? His bamboo flute! It's slightly too large for the Minimate, but it's still impressive that they thought to make it. 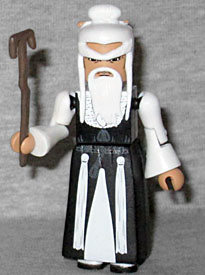 The legendary master Pai Mei is looking pretty awesome in Minimate form. He's wearing his black and white robes, though the details are simply painted on: after springing for Beatrix's new skirt, there must not have been much left over for anything more than flared sleeves and the same skirt piece O-Ren used. However, Art Asylum totally made up for that shortcoming with the hair. He gets a new hair piece that comprises his top knot, the long strands that hang over his shoulders, and his epic eyebrows! He's also got his beard and mustache, which are done as a separate piece that fits around the neck peg. Well done! His only accessory is his crooked walking stick, but that's all he needs to kick some ass. 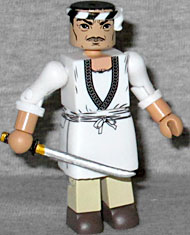 Hattori Hanzo! Now that we have him as a Minimate, it's shocking that NECA never made him in their toyline. He's dressed simply, in the robe and headband he was wearing in his sushi bar, rather than his more ornate robes from later. The details painted on the torso are intricate - he has just a little bit of chest hair poking out of his shirt! - and the ones on his skirt go all the way around. His stripey headband is a separate piece, and you can definitely recognize Sonny Chiba in this face. He has rings around his forearms to suggest his sleeves rolled up, and of course, comes with a sword. That's three times in one set.

And now I can't stop thinking about how epic a three-way fight between Bill, the Bride and Hanzo would have been. Good thing I can now stage my own, thanks to this Minimate set!