In today's review of Baxter Stockman, yo questioned how the original 1980s cartoon writers decided to turn the character into a mutant insect. That may indeed be, as he said, "a mystery for the ages," but we do know a little bit about the origin. For instance, here's a design for a character who was (at the time) only known as "The Fly": 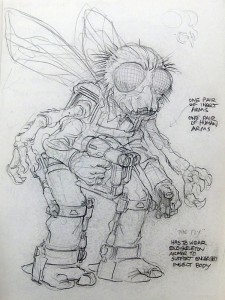 For those comicbook purists who feel that the Archie series and the Fred Wolf cartoon ruined the perfect, beatific vision that the Turtles' original creators intended, take note that this concept came from (TMNT co-creator) Peter Laird.

At any rate, in the cartoon, Baxter Stockman was not the black man he'd been in the comics, but rather a typical elderly mad scientist - think Back to the Future's Doc Brown. At one point, Playmates was considering making a toy of that version of Baxter Stockman: 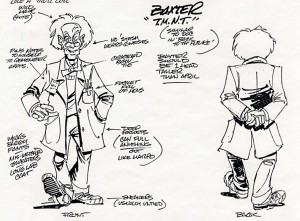 So, why was that version of Baxter never made? Why was the character merged with the existing "Fly Guy" concept? We still don't know. But at one point, the two were definitely separate characters, who were for some reason fused into one.