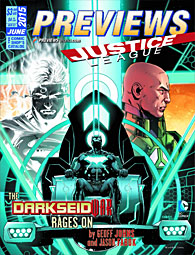 Dark Horse gets things started with the new Masters of the Universe Mini-Comic Collection. It's got all the MotU, PoP, and New Adventures comics in one place. See it on page 45.

If you're looking for the current He-man comic, that's in DC's section, on page 120.

Page 141 contains re-solicits for the Batman: the Animated Series figures: Harley, Ivy and Robin will be in stores in September, while Batman, Batgirl, Riddler and Penguin will be in October. Then on page 144 are the November and December releases of Roxy Rocket and Killer Croc.

Then in November, you'll be able to get Arkham Knight versions of Nightwing, Robin, Catwoman and Commissioner Gordon. Page 143.

Like Swamp Thing but hate his wings? Then page 146 is for you! It's the same figure as before, with less "armor."

Page 456 has the next series of Aliens Minimates.

The Plants vs Zombies Yeti on page 462 is big and scary!

The first Gotham Minimates box set has a weird assortment of characters: Gordon, Black Mask, Riddler, and Captain Essen. Those are on page 465.

Page 468 has one of those $70 6" figures of Judge Dredd, with Previews-exclusive accessories.

There are new Marvel Universe figures on page 475.

Have you ever wanted a 12" Stan Lee figure? Congratulations, then, because 494 holds the key!

A bunch of Star Wars figures are relisted on page 495. Also a few Transformers.

Unexpectedly, there are two MotU statues on page 497 - a bust of He-Man and an animated-style Man-At-Arms.